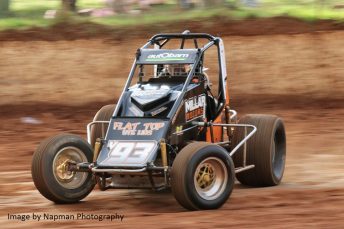 Nyora Raceway had a great days racing with Wingless Sprint action providing variation to the Club Sedans and a healthy crowd enjoyed a family day out on Sunday April the 23rd, brother and sister Travis and Samantha Millar from Melbourne’s Eastern Suburbs, won the two Wingless Sprint features up for grabs in a moment they will enjoy forever.

In qualifying racing leading up to the Wingless Sprints open field final, Wayne Logue took a win just a head of the faster Travis Millar and local flyer Ebony Hobson. Renae Eastham then won the second heat over Travis Bergmeier and Millar with Todd Hobson winning from Nic Green and Millar in the third heat.

Millar qualified in pole position for the final with Logue, Green, Bergmeier, Wayne Hurford, Todd Hobson making up the top six. Fifteen laps was the distance and Millar proved fastest as and hard to pass as he took the win from Logue, Green, Hurford and Bergmeier.

Samantha Millar, sister of Travis won the first of the Ladies Wingless Sprint qualifying races from Eastham who was racing both in the Open and Ladies field as was Ebony Hobson who finished third in heat one.

For heat two it would be Hobson, Eastham and Millar across the line before Millar would go on and win a twelve lap final from Hobson and Eastham giving the Millar family the family double.