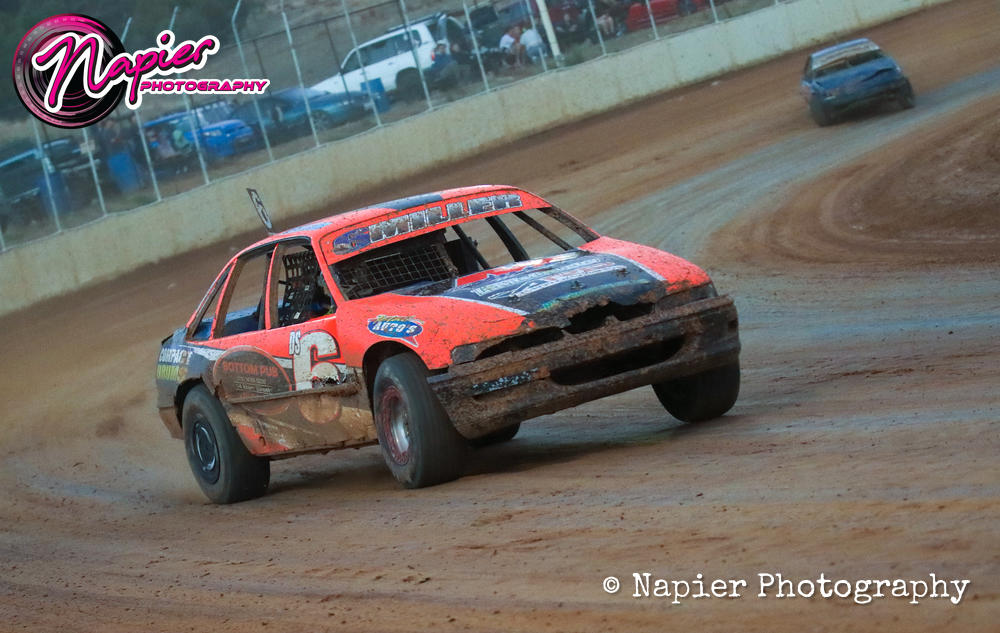 Alexandra Speedway once again held a terrific race meeting with plenty of fast paced racing and some bingles along the way as Damien Miller in the Sports Sedans Power Series round and Kasey Garlick in the Wingless Sprints Cup took out the big wins. Local Alexandra youngster Will Fallon won two Junior finals, Dylan Barrow won one and Tasmanian girl Kiara McKercher won the other through the evening.

The Sports Sedans were having their final hit out at Alexandra before this season’s Victorian title takes place at the venue. The event part of the DIrt X Industries state series was titled ‘the Prelude’ and drivers from Hamilton, New South Wales, Melbourne’s south east and Northern suburbs and the North East of Victoria were just some of the area’s drivers had travelled from to compete. Drivers competed in two heats each with Damien Miller, Josh Service, Steve Kershaw, Miller a second time, Lee Beach, and Kershaw a second time, the qualifying winners.

Twenty-five laps was the distance of the feature event and along the way crashes and break downs halved the field down to ten finishers. Joel Copeland suffering crash damage lost his bonnet and was excluded, Rhys Collins car broke down and as he circulated towards the concrete waiting for the opportunity to open up to go infield, Dennis Reid ran straight into the back of his car and both cars were well and truly damaged.

Josh Service, Lee Beach and Andrew Jordan had a thrilling battle for third to fifth before Jordan made some insanely good passing moves around the outside of his competitors to move to second. Miller led from lap to until the end to win from Jordan, Service, Beach, and Dale Smith.

The Wingless Sprint Cup was the co-main event on the schedule and locally developed former Junior racer at Alexandra Speedway Club Kasey Garlick was one of the favourites for the fans and on credentials. Sean Fitzpatrick, Jordan Nicholas, BJ Harris, Will Green, Kerry Bright and Garlick won the six heat races leading up to the main event.

A number of crashes in the final caused the demise of half the field and some of those unfortunate enough not to finish included BJ Harris who ran in the top three for a long time, Nicholas who won a heat, Kim-Loong Gosling who led the race before spinning himself out of the final, Green who had won a heat and Fitzpatrick who had won a heat race also.

Garlick led from lap ten until the completion of the race on lap twenty to win from Hayden Glare, Jake Warren, Matthew Thacker from New South Wales, and Kerry Bright.

Tasmanian racer Kiara McKercher took advantage of more track time at Alexandra prior to the running of the Australian Junior Sedan title that will happen in early April, and she took the Junior Sedan Top Stars final win ahead of Jack Randall by .326 of a second. Kiarna Barton finished third with Nathan Miles and Logan Mair rounding out the top give.

Will Fallon won two finals on race night, the first was the Junior Sedan New Stars final when he finished well in front of second placed Cruz Farrell and his sister Matilda Farrell who finished third. Billy McBride and Chase Doherty rounded out the top five.

Dylan Barrow was too good for competition in the Junior Open Sedans final with Damon Ingram finishing in second spot to him. Harry Cecil, Owen Cecil, and Noah Collette rounded out the top five.