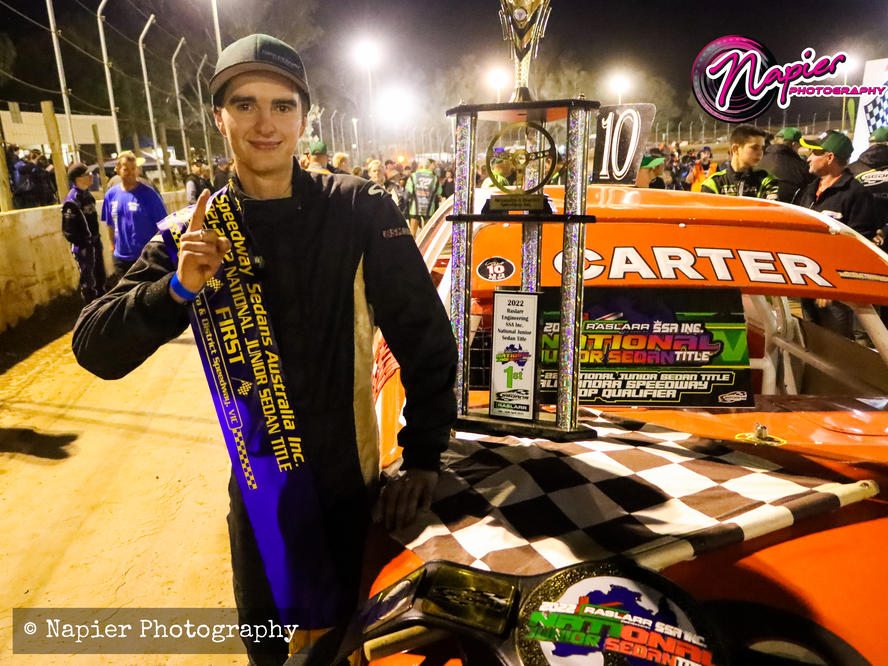 Alexandra member racer Linken Paterson from Healesville was the highest placed of local member drivers finishing in tenth place with Breanna Simpson from Woori Yallock in twelfth. Metcalfe led every single lap whilst Dellar was briefly passed by Tranter close to the race end before snatching his second spot back finishing more than three seconds behind the race winner. Rigby across the weekend set a new eight lap record for the class at the venue however was unable to convert his speed into the big win.

Wins across the weekend went to Beau Oldfield of Western Australia, Jayden Bryant from Alexandra Club, Metcalfe, Dellar, Donny Davis of Western Australia, Rigby in his record race time of 2 minutes 57.732 seconds and River Spitzbarth of Norther Territory in round one. In round two Rigby won again then Dellar a second time, Nathan Miles from Pakenham, Lachlan Robins of Tasmania, Brodie Hollyman of Queensland, River Paterson of Healesville, and Metcalfe a second time also.

A third and final round on night one seen Hancock win then Harry Fowler of Queensland, Jack Randall from Alexandra Club, Cameron Smith from Mildura, Metcalfe to make it three wins from three starts at this point, Dellar also joined the three from three club and Tranter won the last race of night one.

Incredible racing by Dellar and Metcalfe all weekend in particular with Metcalfe taking the win.

In the Modified Sedans state series round Jake Drewett from Mildura won the first of four qualifiers in a record eight lap time for the class at Alexandra Speedway. A 2 minutes 44.479 second time is now in the record books as he beat the Australian champion Brock Atkins in an incredible race with the official timing showing 0.001 the difference between the winner and second spot at the line. Matt Nelson from Alexandra club won the second heat and Victorian champion Kye Walters won the third qualifier. Nelson then doubled up winning the fourth qualifier.

Walters then incredibly won the feature event over thirty laps coming from fourth at lap eighteen to move to third, to second and into the lead on lap twenty-four six laps later, before going on to win from Atkins, Alexandra Club member Brody Chrystie, Todd Atkins and Drewett.

In Street Stock race action Matt Nelson was able to win the first of three qualifying races. Andrew Jordan won the second and Daniel Barton a former national champion won the last qualifier, all three winners from Alexandra Club. In the twenty-lap final three different drivers held the lead at one stage. Nelson, then Shane Roycroft and final Ricky Cornwall who won the night before at Simpson Speedway came again with the win ahead of Nelson, Barton, Jordan, and Leigh Gooding.