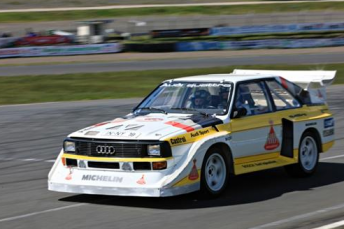 Coincidentally Blomqvist was the first driver to compete in this actual car on the 1,000 Lakes Rally in Finland (23-25 August 1985) finishing second. Walter Röhrl then drove the quattro, now owned by Audi UK, on the RAC Rally that year (23-28 Nov) which included special stages in Scotland.

Mikkola and Blomqvist both won world championship titles with Audi. Mikkola in 1983 after achieving four wins and three second places in the revolutionary Audi quattro with Hertz. Meanwhile Blomqvist took the world title the following year after five WRC victories.