Mike Jones to showcase talent at home round

Mike Jones to showcase talent at home round 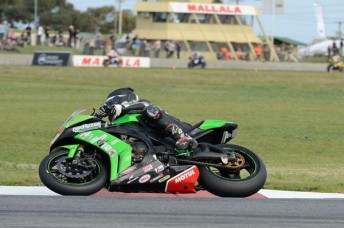 The Swann Superbike Series is set to heat up again when the action packed championship heads to Queensland in just under a months time, and it’s this round that will showcase yet another local talent in Mike Jones.

The 20-year-old Crazy Dogs Kawasaki supported rider, already has a stack of career achievements to his name – and this year is battling it out with the best in the country to leave his mark on the prestigious Swann Superbike Series.

For Jones who currently sits 12th in the Superbike championship standings, round three of the series at Queensland Raceway, means the opportunity to have the support of his family and friends behind him, and show the crowd what the local racer has got.

“I’m really excited about heading to the next round at Queensland Raceway – obviously having the home crowd support is going to be awesome,” he said.

“Judging by the first two rounds, there was a big crowd at Wakefield Park and Mallala, so I’m thinking it will be another big event in Queensland, and I can’t wait to race in front of everyone.

“Having my friends and family there to support me gives me a huge confidence boost. I’ve also had a lot of track time there, so I’m hoping the results will go my way.”

Jones, who was handed mixed results at Mallala in South Australia, is looking to step up his racing and is searching for improved results in Queensland, come June 29.

“After round two I’m feeling pretty confident. I’m making good progress with my riding and the bike setup,” he said.

“We have a few new things to try with suspension and a couple of other things we’re playing around with coming into round three, so hopefully that will give us a little bit of an edge.

“I’m really happy with the progress I’ve made after round two, and hopefully with this next round being at my home track, I’ll be looking to start pushing further towards the front.”