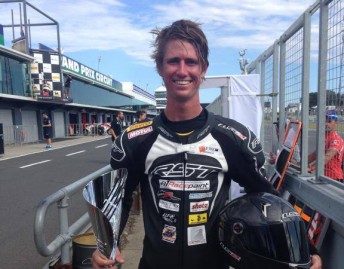 Cube Racing Team’s Mike Jones says he can’t wait to hit his home track at Morgan Park, when the second round of the 2015 Yamaha Motor Finance ASBK Championship presented by Motul Pirelli hits Queensland this weekend.

The second round of the premier road race series in Australia is set for action from the 10th to the 12th of April, with good numbers filling the grids across all categories.

In the Superbike class, all eyes will be on Jones as well as up-and-coming Superbike star Daniel Falzon (JD Racing) to see who can come out on top.

Speaking ahead of the round, Jones said that he is hoping to use his hometrack advantage to get the best result possible on the weekend.

“I’m really looking forward to racing the second round of ASBK as it is my home round, and I think it will give me a great advantage when it comes to circuit knowledge,” he said.

“I think that competing at this round is pretty important – with the knowledge I have here it will give me a great chance to possibly take the championship lead since I am currently sitting in third place.

“So it is really important to get there, do as well as we possibly can, and see how we are sitting at the end of the weekend.”

In terms of the competition on the weekend Jones believes that anyone in the class can win on any given day, and while he admitted Falzon would be a threat, noted that there are a host of other riders to keep an eye on.

“I think that anyone can be a threat on any given race weekend, and we definitely have an advantage with the circuit and our bike since we have already had a season racing on it.

“In particular for Daniel (Falzon) he will be racing a new model bike so they will still have a fair bit of developing to do, and that should give me a bit of a head start this weekend with bike and circuit knowledge.

“I am pretty confident with trying to get race wins and trying to take the round win, but like I said at the end of the day, everybody is a threat out there and we will need a bit of luck to finish on the top step of the podium.”

You can stay on top of all the action from the second round of the SABK via the ASBK website (www.asbk.com.au), or the series Instagram and Facebook accounts.