Midgets and Super Sedans in Action at Archerfield

Midgets and Super Sedans in Action at Archerfield 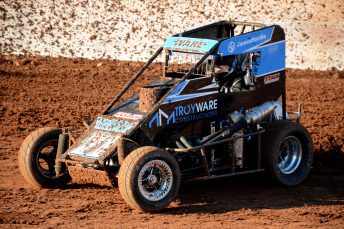 MEDIA RELEASE: In their first outing since the epic Australian Championship won by American star Rico Abreu, the mighty Midgets return to Ausdeck Patios Archerfield Speedway this Saturday night (February 25) for the latest round of competition in the Polar Ice Track Championship. Even though the locals perhaps didn’t achieve the results they were hoping for in the national title final, rest assured this weekend will produce some great racing as they all look to make amends by emerging victorious in the 25-lap feature race. Also on the program is round nine of the Think Money Super Sedan Championship Series featuring Queensland champion Matt Pascoe, plus Compact Speedcars, AMCA Nationals, Modlites and Open Sedans.

Darren Vine, Brock Dean and Rusty Whittaker all qualified into the Australian Championship feature race against the best drivers from Australia and overseas and it seems likely that this trio will be the pacesetters this weekend, with their toughest opposition expected to come courtesy of New Zealander Chris Gwilliam. Having also featured in the national title final and with three feature race wins in Australia so far this season, Gwilliam is the biggest hurdle the local stars will need to overcome in their pursuit of victory.

Whittaker currently sits atop the Polar Ice Series standings just three points ahead of Troy Ware, another proven race winner who is also in the field for this event, with Gwilliam sitting third overall ahead of Dean and Vine. Another potential race winner in the field is former Queensland champion Mark George, while Cal Whatmore is perhaps the most improved driver so far this season, sitting inside the top ten in the series points and edging ever closer to a breakthrough result. Also in the field are series regulars in Cory Stothard, Dallas Sharp, Gavin McDowall, Reid Mackay and Shayne McDowall, with Sprintcar racer Kristy Bonsey making her Midget debut.

Desperately unlucky in the previous round at Lismore Speedway last Saturday night when contact with a lapped car on the final lap robbed him of what would have been a memorable win, Queensland champion Matt Pascoe will be absolutely determined to make amends in the Super Sedan feature race this weekend. Pascoe will take the challenge to current series leader Mark Pagel, who finished fourth in Lismore and won the previous Think Money Championship round at Archerfield in November. After a blistering start to the season that saw him dominate the opening rounds, Pagel endured a mid-season form slump before bouncing back last weekend to consolidate his championship lead with a typically understated, but effective, performance. In his best result of the year, Wayne Brims put in a blistering final two laps to snatch third in Lismore and, if he can reproduce that pace on Saturday, he will be a huge chance for feature race honours. Wayne Randall’s wealth of experience and record of success at Archerfield (more feature race wins than anybody else in the field) ensures he will be a contender, while Tony Brinkmann returns to his home track on the back of his best result for the season thus far. Others hitting the track include Jack Childs, Rodney Craft, David Okeefe, Dempsie Pails, Mark Obrien, Nicholas OKeefe, Bob McCosker, Brendan Doyle, David Musch, Brian Trevithick and Ed Doherty.

As has been the case for most of the season, Compact Speedcars have gathered a big field of contenders for their latest outing, with 18 drivers set to do battle. Last start winner Robbie Stewart will take on the likes of Wayne Corbett, who trekked to Rosedale in Victoria last weekend and represented Queensland with distinction to finish third in the feature race, along with Barry Gibbes, Dave Collins, Nathan Mathers, Mark Maczek and club champion Nick Gannon.

Steve Potts and Jason Dreaver are expected to continue their rivalry of recent weeks in the AMCA National events, while the return of Nathan Durston might make things interesting if he can bring the type of form that he produced regularly before stepping away from competition. With several drivers contesting the NSW Title this weekend, a small field of Modlites will contest their events and there will be two divisions of Open Sedans to complete another night of action and variety at Queensland’s premier speedway venue.

Gates open at 4.00pm, early racing gets underway at 4.45pm and Midget time trials are scheduled from 5.30pm. The main program, featuring the Polar Ice Midget Track Championship and the Think Money Super Sedan Championship Series, kicks off at 6.00pm.