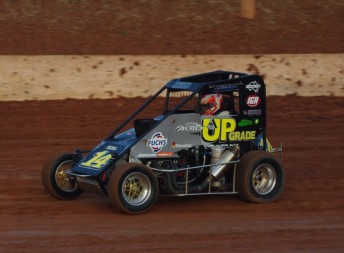 This Saturday night (November 8) at Ausdeck Patios Archerfield Speedway, a crack field of local and interstate drivers will hit the track for round two of the Midget Super Series presented by American Tire and Racing Services.

This annual competition has consistently produced some of the best Midget racing in the country and Brisbane fans can again expect something special when 26 cars hit the track this special 10th anniversary Super Series event.

The opening round of the 2014/2015 Super Series Championship was held at Gunnedah Speedway two weeks ago and it was former national champion Nathan Smee who emerged triumphant over fellow New South Welshman Troy Jenkins, with both drivers trekking north to take on Queensland’s best this weekend.

In fact, more than half the field will comprise interstate competitors, including the current Australian Midget Champion in Adam Clarke.

Having finished a disappointing – by his standards – third in his last appearance at Archerfield earlier this season, Clarke will no doubt be determined to improve on that result with an emphatic articulation of his considerable skills.

The prospect of Smee, Jenkins and Clarke duking it out is tantalising enough, but throw in more than 20 other racers focussed on victory and the scene is set for a sensational night.

Of the local competitors in the field, Michael Harders is the in-form driver thus far with some very strong results at home and away.

Last time out at Archerfield, Harders defeated Clarke to finish second in the feature race, his second podium result in as many events.

Harders also headed to Gunnedah two weeks ago for the opening round of the Super Series and performed with distinction to finish in eighth spot in the 30-lap main event. Given his extensive experience here at Archerfield, expect Harders to be somewhere near the front of the field this week.

Having previously won a round of the Speedcar Super Series, the Victorian Midget Championship and the South Australian Easter Tri-City Series among other successes, Anthony Chaffey will be a real threat on his home track despite the fact that this is his first appearance for the season, with Brock Dean – who scored a top ten finish in the previous round at Gunnedah – and Ken Stanaway also expected to be at the forefront of the local challenge.

Of course, the likes of Matt Hefford, Troy Ware and Scott Doyle are also capable of running near the front of the field, but they will need to bring their very best form if they are to make a play for a place on the podium.

On the support program, Compact Speedcars are back after having produced a thrilling feature race at their last appearance, with Wayne Corbett striving for back-to-back wins.

Also on the program this week are AMCA Nationals, 360 Sprintcars, Microsprints and Open Sedans.