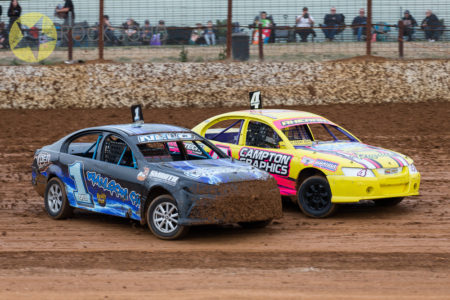 From Midday this coming Saturday, Mid-Western Speedway will deliver another exciting race day for the final event of the season with the annual Brendan Hannabury tribute race known as the ‘Hanno’ for the late Mortlake race driver being held for Street Stocks along with the ‘Stoney Point 500’ for Wingless Sprints headlining a day that includes Super Rods, Limited Sportsman and Vintage classes.

A great field of Street Stocks has put their hands up to compete this Saturday in the co-feature event of the day with Victorian based Queensland Champion Matt Nelson at the top of the line-up. Nelson will resume battle with Morris Ahearn a Mortlake member driver and a driver he has recently competed closely with, such as the King of the Mount event at Mount Buninyong. The two drivers are likely to be in front of the pack this Saturday along with the likes of Ricky Throckmorton from Panmure, Paul Domburg from Ballarat, Brad Warren a Mortlake member and Steven Watts from Warrnambool. Terrific action with Holden vs Ford, racing door to door.

The annual Stoney Point 500 feature for Wingless Sprints has attracted a handy list of open wheel outlaws with Robert Whiteside, Thomas McDonald, Jeremy Pearson, John Egan from New South Wales, Steven Hateley, Aron Lawrence, and Clint McLaren just some of the competitors to keep an eye on. The Holden powered six-cylinder wingless Sprintcars are spectacular, especially when they are wheel to wheel and should produce another ripper feature event.

Super Rods, a class that is recognised as the most popular club class in the South West of Victoria are also on the programme with Paul Verhoeven, Jamie May, Jacob Pitcher, Neville Gange, Michael Coad, Stanley Marco, and Dane Court just some of the race drivers to watch. The eight-cylinder powered class with their unique back em’ in style is always entertaining.

Limited Sportsman make a return to the Darlington bull ring with South Australian champion Troy Curran coming to town from Horsham. Curran leads a line-up that includes Bowen Donkers from Portland, and Craig Ansell from Hamilton amongst others in another grass roots open wheel class.

Vintage Sedans along with Hot Rods are also on the programme for some spirited demonstrations as owners and drivers show off cars that fans used to pack dirt tracks around the nation to see.

Gates for competitors open at 9am and to the public at 10am Racing begins at Midday with a 4 to 5pm finish planned. No Eftpos on facility, Cash only, No BYO Alcohol and No fires to be lit around the track.