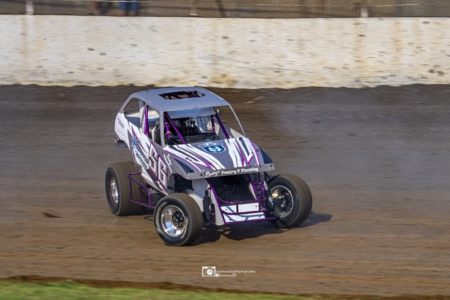 This Saturday from Midday, engines will fire up and dirt will fly as the Mid-Western Speedway open’s its gates for the fan favourite Super Rods for the annual Col Grist Memorial. Not only will the Super Rods have a big event, the day will also be a State Points event for the Standard Saloons that has attracted some of Victoria’s best and fans of the ole’ 34 Ford body will be pleased that the Speedway Drivers Association of Victoria Hot Rods will also compete.

Mini Sprintcars, Formula 500s and Junior Formula 500s make for a terrific race meeting and with the event expected to finish in daylight and before 6pm, it’s a great event for families to get out to before heading home to the fireplace.

The Col Grist Memorial one of the longest standing races in the Super Rod class is an event that drivers want to claim to have won in their life and this weekend a stellar line-up will compete in the race to try and win this year’s version supported by family connection G & C Forestry. For some drivers in the field this could be their first Col Grist Memorial. The local South West Victoria grown class is extremely popular eight-cylinder powered racing.

Family members Billy Grist and Dane Court cannot wait to get down to business on Saturday and Jamie May, Neville Gange the Victorian champion and Michael Coad are sure to be at the pointy end of the field come feature time.

Tin-top racing is headlined by the Standard Saloon state points round and a handful of Victoria’s strongest competitors are signed on to compete. Daniel Stewart from Morwell and the currently number three ranked racer in the class leads Stephen Douglas, Rhys Lansdown, Hanna Domburg, Wayne Sheerman and Patrick Vuillermin into battle. Vuillermin a recent winner in Bairnsdale, Lansdown won this year in Nyora and Sheerman at Wangaratta and all three are sure to give Stewart a hard time at Mid-Western Speedway.

A small contingent of Formula 500’s has nominated this Saturday with Mat and Adam Turner, Jett Bell and Declan Robinson some drivers to follow for race fans. Formula 500’s also has a strong Junior contingent with a dozen race drivers competing. The field is complimented by New South Wales based racers down for the day along with locals such as Tyler Maggs, Chad Bell, Thyson & Jack Balcombe, Caleb & Jordy Langdon, and Holly Harris. The flying 500s are sure fire entertainment.

Rounding out the action-packed day is the Mini Sprints with Jason Lynn last month’s winner once again leading the field. Ally Moore, Maureen Sell, Scott Burchett and Rahmon Rivero will all be keen to get one over Lynn on Saturday and take the win.