Michels makes the most of Australian opportunity

Michels makes the most of Australian opportunity 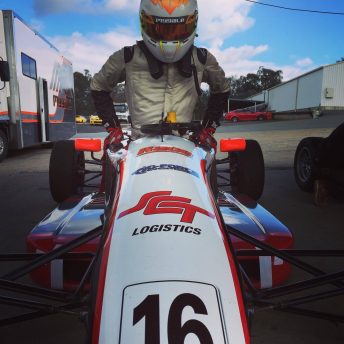 Jordan Michels of Invercargill has made the most of his opportunity in a test drive of a Mygale Formula Ford race car in Australia.

Michels received the chance to test at Winton Motor Raceway in Victoria recently after winning Class 1 of the 2016/2017 South Island F1600 Championship thanks to an arrangement between the South Island Formula Ford Association and Mygale Cars in Australia.

Crossing the Tasman a few days before, Michels took the opportunity to meet new motorsport contacts and visit the Mygale workshop in Melbourne before travelling north to the Winton circuit for a very successful test at the rural venue.

“It was the perfect test day”, said Michels on his return home recently. “I was really fortunate. I got seven sessions behind the wheel, well over 100 laps. I got faster with every session. We were able to overlay my data with every driver that has driven a Mygale at the track, guys like Richie Stanaway, Cameron Hill, Will Brown and Taylor Cockerton. We could see where we were making gains and losses around the circuit. It was perfect timing for a test as it came during our off season.”

The outing took place in an Australian specification car which is fitted with a Duratec engine, more modern and more powerful than the Kent engine used in the New Zealand series. “There was a huge difference. The Australian cars also use different tyres. They give a lot more grip and make the steering heavy. The power difference is insane. You could get wheelspin in every gear. All the improvement I made came from getting used to the new engine and the throttle application.”

Michels went to Australia with the intention of spending an additional day testing the Duratec powered Mygale at the Phillip Island circuit south of Melbourne. However the Winton test went so well that Greg Woodrow, CEO of Mygale Australia, offered Jordan a test in his Porsche GT3 Cup Car.

“I jumped at the opportunity. Philip Island is just an amazing facility and everything is run so professionally. I was on track with Lamborghini’s, Ferrari’s and cars worth millions. It’s a boys dream to drive a car like that on a famous circuit. Once again we had data to compare with other guys that have driven the car but really I was just savouring the moment.”

“It was great to go over to build relationships and the team was more than happy with me, and have indicated they would be happy to run me in a State Championship over there next year if I can raise the money. I am keen to come back and do the New Zealand Championship and then hopefully go and do that.”

Greg Woodrow, the CEO of Mygale Australia, who has tested and run many of Australia’s and New Zealand’s brightest talents over the years, noted that Jordan has everything in place to build a motorsport career at any level and said, “without doubt Jordan is a star of the future just like a number of other young New Zealand talent, such as Taylor and Richie, who we have had the pleasure of being involved with. The Mygale organisation, both in Australia and France, has been involved with this test for Jordan and he has approached the program at a very professional level, both in and out of the car”.

Michels sums it up well, “the opportunity to go over and test both cars was absolutely fantastic and I owe it all to my backers that have been with me since day one.”