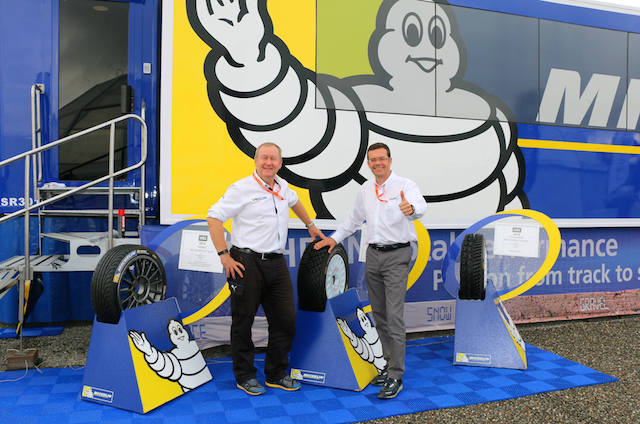 MEDIA RELEASE: Michelin has signed a new agreement to extend its commitment to the FIA World Rally Championship for three more seasons.

The French tyre company and WRC Promoter have agreed an extension of their current partnership under which Michelin will be Official Tyre of the WRC until the end of 2019.

The agreement comes as Michelin bids to secure its 300th WRC victory at RallyRACC Catalunya – Rally de España this weekend, and stands on the verge of sealing its 50th world title in the drivers’ and manufacturers’ championships.

Michelin’s involvement in the WRC dates back to the inaugural championship in 1973. It has provided high-performance competition tyres to manufacturers for all but four seasons since then.

All the leading car manufacturers competing in the WRC use Michelin tyres to provide maximum grip, speed, performance and endurance on surfaces as diverse as hard packed gravel, slippery asphalt and frozen snow and ice covered tracks.

Under the new agreement, Michelin will enjoy prominent top-tier branding at all WRC rounds, as well as on championship materials and WRC Promoter’s digital communications outlets.

It will also continue to have a strong presence in the WRC’s service parks around the globe to maintain the existing relationship between WRC drivers and fans with its tyres.

Michelin motorsport director Pascal Couasnon said open competition between different tyre manufacturers was at the heart of the company’s commitment to the WRC.

“We are honoured to be working so closely with the factory teams and the confidence they have in us keeps driving us to design the best possible tyres,” he said.

“Our loyalty to the sport is also due to the close ties that exist between the discipline and everyday motoring, since the WRC features roads and tracks that are used by ordinary motorists.”

Couasnon said Michelin was excited by the task of producing tyres for the new generation of World Rally Cars which will enter the championship next season.

“The more powerful cars that are poised to make their debut in 2017 pose a fresh challenge for our engineers whose mission is to continue conceiving tyres that are not only increasingly competitive, but also safer and more versatile,” he said.

“For Michelin, competing in the next three WRC seasons will provide us with further opportunities to innovate and showcase our expertise.”

WRC Promoter managing director Oliver Ciesla said the new agreement would strengthen the WRC as it prepared for an exciting new era.

“I’m delighted Michelin has furthered its commitment to WRC for another three years,” he said. “Michelin was winning world rallies when the WRC started and more than 40 years later it is still on top of the podium, and hoping to reach two more landmarks this weekend.

“Michelin’s name is synonymous with the WRC. The tough and varied conditions that the WRC offers provide an ideal platform for the company to highlight the proficiency of its tyres in the heat of competition.”