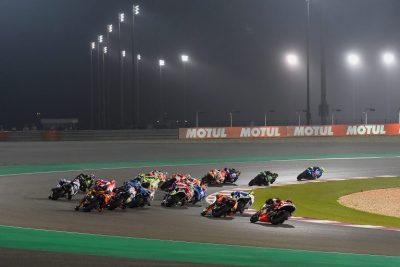 Michelin is on the way to the Losail International Circuit near Doha in Qatar as the 19-round 2018 MotoGP™ World Championship season kicks off with the Grand Prix of Qatar.

The Qatar round is the only race held under the cloak of darkness, but this year’s event has added complexity for all concerned, as it will be a day-night meeting with some of the practice sessions held during the afternoon and others, including qualifying and the race, taking place under the floodlights. The 5,380m long Qatari track with its six left and ten right-hand corners is a very specific test for all concerned, especially the tyres, mainly due to abrasive nature of the surface, which is caused by the sand that is blown off the surrounding desert environment which encircles the whole facility. This, added to the differences in track temperature between day and night which will be relevant this year, has meant that this month’s three-day test at Losail gave increased importance to the 24-riders and Michelin as they prepared for the season opener.

The information gathered by Michelin technicians during the pre-season has facilitated some fine-tuning to be made to the compounds of tyres, which had been assessed at the three individual tests held at Sepang in Malaysia, Buriram in Thailand – a new circuit to the MotoGP calendar for 2018 – and then finally in Qatar respectively. This has enabled Michelin to complete a new approach for the forthcoming season, as it has already informed Dorna of all the tyres and compounds which will be available for each race during the year, enabling all the teams and riders more knowledge of the allocation and allowing them to plan ahead.

Michelin’s allocation for the Qatar race will consist of MICHELIN Power Slick tyres in soft, medium and hard compounds for both the front and rear. With the rear specifications all featuring an asymmetric design with a harder right-hand shoulder to tackle the extra turns that go in that direction and add increased stresses to that side of the tyre. These tyres will be identified by coloured bands on the side walls; these will be white for soft, no band for medium and yellow for hard. Following a wet weather trial – when the track was artificially watered at Qatar during the test – the MICHELIN Power Rain tyres will be available if Race Direction deems it is safe to compete in the case of precipitation. These will be in a soft (blue band) and medium (no band) compounds for front and rear, with the rears again having an asymmetric design, a characteristic that will feature on rear MICHELIN Power Rain tyres for all races this season.

Michelin and the 24-strong MotoGP field will take to the track on Friday afternoon for the first session, followed by the opening Free Practice under lights later that evening. Saturday will see further practices, before the excitement of qualifying takes place beneath the artificial glow of the floodlights. The inaugural race of the MotoGP season will get underway at 19,00hrs local time (16.00hrs GMT, 17,00hrs CET) on Sunday 18th March, as the Michelin tyres will be put through 22-laps of hard racing during this unique event.

“We have had three positive tests leading up to the first race here at Qatar. From Sepang we tested two new front tyres which the riders liked and they gave them confidence, so much so that they will be used this season. We were also pleased with results obtained in Thailand. It was the first time we had been and the results were very good and it gives us some valuable information about tracks with that kind of severity and in those conditions, which we will be able to use as we move forward and will give us a good idea of what is required when we return to race in October, although that is the monsoon season so things might be quite different.

“One big thing we have completed before the season starts is to supply Dorna with the allocation of all tyres for each event this season, ahead of the first race. This will give the teams and riders a greater degree of stability as they plan for each event, as they will know what tyres they will have and can plan each session accordingly in advance. As always, safety and performance are Michelin’s main considerations and if there are ever any issues that we need to combat, such as weather conditions or track alterations, we will make careful evaluation and then decide as to any changes, but not without prior consultation between all parties first.

“Regarding the first race, the surface at Losail is very abrasive so we have brought a selection of tyres to cope with that, we learnt a lot during the three-day test as to what to expect between the day to night changes, so we believe we have the right tyres to manage all situations. The asphalt will obviously have a lot more grip as both Moto2™ and Moto3™ will be there, so the track will have more usage. We are really looking forward to racing again and we’re expecting a promising start to the season.”