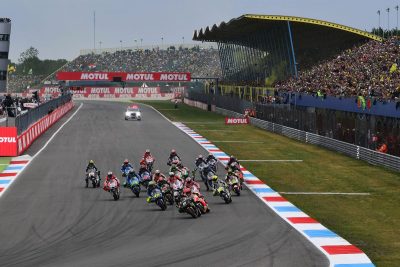 Michelin is heading north for round eight of the MotoGP™ Championship as the series travels to the historic TT Assen Circuit in the Netherlands where the race will be staged in July for the first time since 1955.

The Dutch TT – as it is officially known – has been running since 1925 and this season sees the 88th time the event has been raced. It changed to a Grand Prix in 1949 when the championship was founded and is the only race track to have remained of the calendar consecutively for the full seven decades that the motorcycle World Championship has been staged. The short-circuit venue was built in 1955 and was 7,705m long – prior to that the race was held on the local roads and streets around Assen and the surrounding villages – and following changes to the layout, the current track is now 4,542m in length. It is this mix of six left and twelve right corners, which form one of the most loved tracks in the world and ‘The Cathedral’ of motorcycle racing, with its high speed curves and ideally banked corners makes it a particular favourite with racers.

Assen is not a venue that is particularly severe on front tyres, so the MICHELIN Power slicks in a soft, medium and hard symmetric compound will not be pushed to the extremes that are experienced at other circuits, but it is a different examination for the rears. With the technical layout and many high-speed turns, the soft, medium and hard asymmetric rear MICHELIN Power Slicks will have plenty of work to do, with the harder right-hand-side having to contend with the increased temperatures and stresses that are experienced through Assen’s plethora of fast rights.

Michelin’s journey through the Netherlands will take it to the most northerly circuit currently on the calendar and Assen has been known to have its fair share of wet weather. If conditions do deteriorate then the MICHELIN Power Rain tyres in a soft and medium compound, for both the front and rear, will be available to contend with any precipitation, with the rears featuring an asymmetric right-side, the same as the slick version.

Michelin and the MotoGP field will begin to worship at ‘The Cathedral’ on Friday 29th June with two Free Practice sessions. Qualifying is on Saturday afternoon and this will determine the grid positions for Sunday’s 26-lap Motul TT Assen. The main event will be staged on a Sunday – for only the third time in the race’s illustrious history – and when the riders line-up on the first of July at 14.00hrs local time (13.00hrs BST, 12.00hrsGMT/UST), the lights will then go out to signal the start of another intriguing chapter in this season’s championship at one of motorsports most legendary locations.

“Assen is one of the most popular circuits with the riders, but because they like it so much it does not make our task any easier, in fact it means there are more demands and expectations as they all want to perform well there as the circuit has such a great history. It is a very technical track and what you do in one corner can really dictate your performance and position further down the track. The riders demand good grip from the rear to manage the long, fast corners, but there also needs to be an instant response from the rear asymmetric due to the rapid changes of direction on this narrow track. There is always a concern over the weather and temperatures at Assen, so we have to be prepared with tyres to cover the whole spectrum and give everyone a tyre they can use on race day – no matter what is the weather – this is what we have organised and we have a complete allocation for all situations.”