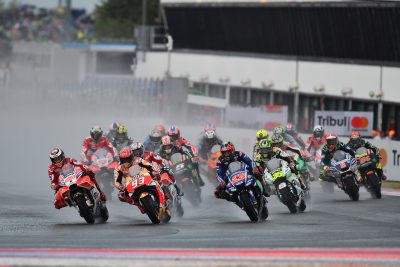 Michelin’s next stop on the 2018 MotoGP™ calendar is a trip to Italy and the Misano World Circuit Marco Simoncelli where the Gran Premio Octo di San Marino e della Riviera di Rimini will host round 13 of the championship on a track situated close to the coastline of the Adriatic Riviera.

The Misano circuit is a precise track that involves particular attention to make a fast and smooth lap over its 4,226m distance and through its six left- and ten right-hand turns. The layout has a long and fast sweeping curve, with slower turns and high-speed corners mixed together over a track that has a medium abrasive surface. These particular demands lead to a circuit that needs a range of tyres to cope with its technical stresses and the MICHELIN Power Slick tyres for this event have been selected to match those requirements. The soft, medium and hard front tyres are all symmetrical, with the rears all asymmetrical and featuring a harder right-hand side to manage with the extra turns that go in that direction.

The Misano circuit has been a venue for motorcycle Grand Prix races since 1980 and a continual fixture since 2007. It has the title of the San Marino GP – after the small Republic in Italy – and is an event that has also been staged at Mugello and Imola, before finding its home at Misano. Situated in close proximity to the seaside resorts of Rimini, Riccione and Cattolica, all of which are highly regarded by sun-seekers, the Misano World Circuit Marco Simoncelli can also be susceptible to wet weather, as was experienced last year, so the MICHELIN Power Rain tyres will be offered to combat such conditions. These tyres will be offered in soft and medium symmetric front and an extra-soft and soft rear. The extra-soft rear will be a symmetric finish, whilst the soft will have an asymmetric design with a harder right shoulder.

Michelin and the MotoGP field will take to the track on Friday 7th September to begin preparations for Sunday’s 27-lap race, as this season’s event is one-lap shorter than before due to the new championship ruling. Saturday will have further practice sessions, followed by qualifying to decide grid positions for the race, which will get underway at 14.00hrs local time (14.00hrs CEST, 13.00hrs BST, 12.00hrs GMT/UST) on Sunday 9th September.

“After everything that happened at Silverstone and here in Misano last year, we are hoping for some better weather in Italy this week. Misano is a demanding track that can create quite high temperatures from the rubber, especially on the front tyres as the bikes spend a lot of time leant over, so we need to have compounds which meet these demands. In 2016 we had a very impressive performance here on our return and we hoped to improve on that in 2017, but the weather had other ideas, that said though, the rain tyres performed really well in quite difficult conditions on a low grip track in the wet and we saw an exciting race. We hope that the bad weather won’t play a part again this season, but no matter what, we are ready!”