Michelin is off to the Island and its titled grand prix

Michelin is off to the Island and its titled grand prix 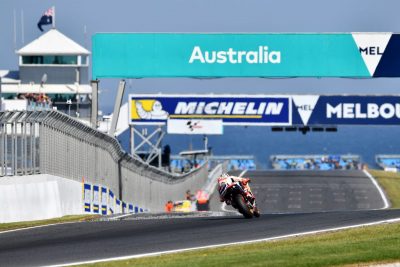 Michelin has headed south for the second leg of the three-week flyaway tour and to a race that holds special significance for the French company as it is the Michelin® Australian Motorcycle Grand Prix which will be held at Phillip Island this weekend.

Round 17 of the MotoGP™ World Championship sees the paddock travel over the equator for only the second time this season and a date with one of the most spectacular and demanding circuits on the whole calendar. The 4,448m layout is one of the fastest tracks of the year and its high-speed nature makes it one of the most extreme tests for tyres that Michelin visits. Fast, flowing turns produce huge amounts of heat, with the final corner being the bend which shows the highest temperature of any of the 278 turns that the MotoGP field face during the 19-race season. The high stresses generated, the requirement to combat its anti-clockwise layout covering seven left- and five right-hand bends and the necessity for a tyre that needs to warm-up quickly due to the cool temperatures that can be encountered at this time of the year, means that Michelin has to deliver a special tyre to work to its full potential at its named Grand Prix. The so-called ‘Phillip Island’ tyre meets all those demands and delivers the riders with a confidence-inspiring tyre to push to the extreme and give close and exciting racing, as was witnessed last season in Australia and has also been the case during many races in 2018.

The MICHELIN Power Slicks for both the front and rear will all be asymmetric in design – one of only three times the full range is available in such a selection throughout the season, with Sachsenring and Valencia being the others. The soft, medium and hard compounds have been ideally matched to meet the rigours of the track, with the left-hand side having a harder compound to cope with the extra demands faced by that side of the tyre and the increased heat, whilst the right will be a softer rubber designed to warm up quickly and give the riders the grip they require for those corners.

The spectacular racing nature of the track also has an equally breath-taking setting, as it nestles on the cliffs of Phillip Island looking directly out over the Bass Strait and on to the Tasman Sea, but this stunning backdrop can also provide extremely inclement weather, from heavy rain to wintry showers. With this heightened possibility at this time of the year – its spring in Australia – the MICHELIN Power Rain tyres will be available to counter the wet conditions. This allocation will be as finely tuned as their slick counterparts to meet the demands of the circuit and will be available in a soft and medium symmetric for the front, with an asymmetric soft and medium for the rear.

The Michelin® Australian Motorcycle Grand Prix weekend begins on Friday 26th October when the riders take to the track for two Free Practice sessions. Saturday will have two more practice periods, followed by Qualifying to decide grid positions for the 27-lap race. Sunday 28th October will see the third running of the Michelin® Australian Grand Prix when the lights change to signal the start of the race at 16.00hrs local time (06.00hrs CET, 05.00hrs GMT).

“Phillip Island has a special significance for all involved with Michelin, as it is the one race of the season where we have the title sponsorship, so it feels very much like ‘our’ race and with the whole Asian-Pacific market being so important to Michelin, it gives the event an added meaning. The track is one of the most challenging throughout the year, it puts stresses on the tyres that we do not see anywhere else. Our tyres need to contend with high lap-times, a very asymmetric layout and some extremely fast corners, so they need to perform at all those levels, as well as having the ability to warm-up quickly, because it can be very cool there, as we have seen in recent seasons. This is a circuit we are always very respectful of and one that we don’t take lightly, that is why we have a tyre that is particular to Phillip Island, it is important for us to perform to the best of our ability at the Michelin® Australian Motorcycle Grand Prix and we will certainly be doing that – and although last year’s race was extremely exciting, we will be trying to make it even better!”