Michelin is equipped for the shortest circuit on the calendar

Michelin is equipped for the shortest circuit on the calendar 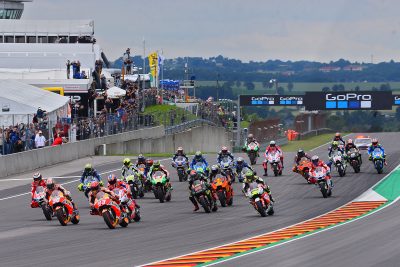 Michelin is heading to Germany and the Sachsenring circuit for round nine of the 2018 MotoGP™ World Championship where the Pramac Motorrad Grand Prix Deutschland will be staged on the shortest track that the competitors visit in the entire season.

The 3.671m layout has a predominantly left-hand feel to it, with 10 of its 13 turns travelling in that direction. Its tight configuration and slower lap-times makes this one of the most challenging circuits of the season and an event that usually gives exciting and close racing. Following a complete re-surface in 2017, Michelin went to last season’s race weekend with little data regarding the new track, this was due to a noise restriction prohibiting a test with MotoGP bikes, but this time Michelin and the whole paddock is better equipped following the information gathered at last year’s event.

The technical layout, which despite providing slower lap-times, still provides some very fast and long left turns which give excessive stresses to that side of the tyre. To cope with this the MICHELIN Power Slicks that will be available in this season’s allocation will all be of an asymmetric design for both the front and rear. With soft, medium and hard compounds specifically designed to match the rigours and demands of the Sachsenring circuit, the tyres will have a harder left-hand side to withstand the increased use that side of the tyre is subjected to, whilst the dual compound design will have a very soft right shoulder to enable the rubber to heat-up quickly and give the riders the confidence and grip they need through the three right turns and for the cooler mornings that are regularly experienced at Sachsenring.

Formerly a road based circuit in-and-around the city of Chemnitz in the eastern part of Germany, near the cities of Dresden and Leipzig, Sachsenring’s purpose-built track was opened in 1996, hosted its first motorcycle Grand Prix in 1998 and then had a substantial update to the track and facilities in 2001. Its position usually draws a large and vociferous crowd during the weekend, but its location can also lead to wet and cold conditions. With this threat the MICHELIN Power Rain tyres will be available to cope with any wet weather and will be offered in a soft and medium compound for both front and rear, with just the rears having an asymmetric design with the harder left side.

Michelin and the MotoGP field will take to the track on Friday 13th July for two free practice sessions in preparation for Sunday’s 30-lap race. Qualifying for the main event takes place on Saturday, this is after two more practice sessions on that day. Round nine is then scheduled to get underway at 14.00hrs CEST (13.00hrs BST, 12.00hrs GMT/UTC) on Sunday 15th July, with a race that will signal the end of the first part of the season, as a shortened summer break will follow the conclusion of the Sachsenring weekend.

“We are going to Sachsenring much better prepared this year than we did in 2017. We had no opportunity to test the surface last year, but now we have a lot of data and we have been able to make tyres that are specifically matched to the demands of such a unique circuit. Its anti-clockwise design, excessive left hand corners and very fast turns make it a technical and demanding track. The riders spend a lot of time of the left edge, so when they get to a right turn that side has lost a lot of heat and has to warm-up quickly, so we need a tyre that acts very differently on both sides and gives the riders the confidence they need. It’s also a track that can be very cold at times, but can also get very hot when the sun shines, so we need an allocation to cover that. What we selected at the start of the year is based on all those factors and we are confident we have the right rubber for all eventualities.”