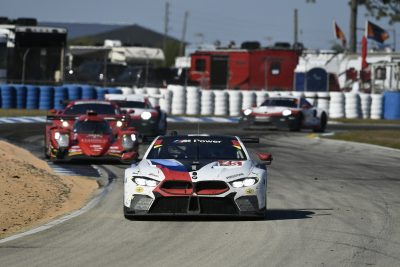 The “cool” temperature range Michelin tyres are designated as an option for Michelin GT Le Mans (GTLM) class teams to use in track temperatures in the mid-to-high double digits.

Today, those Michelin tires performed well beyond that window as Porsche and BMW combined to sweep the podium at the Mobil 1 Twelve Hours of Sebring, the second stop in the 2018 IMSA WeatherTech SportsCar Championship.

“Our philosophy is to design our tyres with a wide bandwidth of performance. The IMSA competition is extremely close, so our team partners pushed those limits on a very fast, hot and bumpy track.” said Chris Baker, Motorsports Director, Michelin North America.

“We expected the track temperature to increase 10 degrees C from the race start at 10:40 a.m. to a peak between 45 and 50 degrees at mid-race and then drop 8 degrees by the finish, and the track was 28 degrees at the start, peaked at 48 degrees and then dropped back down,” said Chris Baker, Director of motorsport, Michelin North America.

Porsche and BMW extended the use of their Michelin “cool” range tyres for much of the 12 Hour race on the fast, bumpy 3.74 mile circuit to score the first “major” win for the latest generation Porsche 911 RSR.

“We did all of our setup work in the night sessions and during the morning sessions based on track temps,” said Nick Tandy. “We knew which Michelin compound tyre (cool) we’d be running at the end of the race. You hope the track comes to you, grip comes to you and that the rubber that is down on the track meshes with the Michelin tyres that we’ve got. For us it really did.”

The victory completes a personal slam of the three longest IMSA endurance races for Porsche factory co-drivers Patrick Pilet and Tandy, following their 2014 class victory at Daytona, and historic overall race win in the wet at the 2015 Petit Le Mans. Tandy also has the crown jewel of endurance racing, an overall win at the 24 Hours of Le Mans in 2015.

They were joined on the podium by Porsche teammates Laurens Vanthoor, Earl Bamber, and Gianmaria Bruni who finished third.

Bouncing back from a disappointing season opener at Daytona for the new BMW M8 GTE was the BMW Team RLL with drivers Alexander Sims, Connor De Phillippi and Bill Auberlen, who made his 25th Sebring start.

Adding to the BMW weekend were the new class pole and qualifying record by De Phillippi and fastest race lap, set by newcomer Jesse Krohn.

The Michelin GTLM partner teams took different approaches to their set ups for Sebring’s unique combination of high speeds straights, bumps and twisty corners with both concrete and asphalt surfaces.

BMW consistently showed trap speeds in the 162-164 mph range while competitors, perhaps with more downforce, were all in the 158 to mid-159 mph range, but clawed back those gains in the demanding corners of the second timing sector, setting up a battle that saw the top four cars separated by just nine/tenths of second after seven hours of racing.

After today’s successful event, Michelin will team with IMSA and Sebring International Raceway for the Michelin IMSA SportsCar Encore, a special, four-hour non-points event November 9-11, at Sebring for Pro-Am entrants in GT3, GT4, TCR and LMP3.

The opportunity to have a special event for the Pro-Am competitors who are the backbone of the sport combined with an early opportunity to be on track with Michelin appears to be drawing strong early interest.

The next stop for the IMSA WeatherTech SportsCar Championship comes April 14th, in Long Beach, California.