Michelin back on top at the Nürburgring

Michelin back on top at the Nürburgring 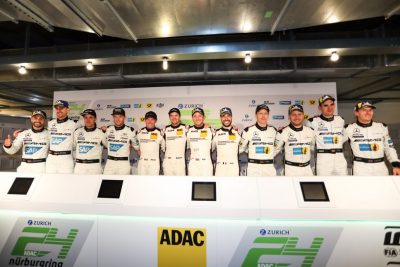 After suffering defeat in 2017, Michelin was eager for revenge around the Nürburgring’s 25km Nordschleife which has hosted the circuit’s 24-hour showpiece since the 1970s and which invariably attracts more than 250,000 spectators.

The French tyre firm’s efforts were rewarded with the top five places at the flag in association with tree different makes – Porsche, Mercedes and Aston Martin.

The outcome was essentially settled with an hour to go when action resumed after a long break caused by thick fog in Germany’s Eifel Mountains. The re-start saw Fred Makowiecki (N°912 Porsche) pass Adam Christodoulou (N°4 Mercedes) through Turn 1 (a manoeuvre which resulted in a coming together of the two cars) and the Frenchman went on to cross the line by a margin of 26.4 seconds.

It was Porsche and Michelin’s first Nürburgring 24 Hours win together for seven years and the association also ended up harvesting the weekend’s pole position (Vanthoor) and fastest race lap. It is the combination’s second major endurance victory of the season after March’s 12 Hours of Sebring.

The race got off to a sunny start on Saturday afternoon but overnight rain produced a number of crashes before heavy fog prompted a red flag interruption at around midday Sunday.