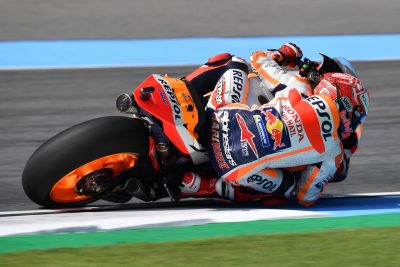 Michelin and the whole MotoGP™ paddock had to tackle a new venue during this weekend’s inaugural PTT Thailand Grand Prix at the Chang International Circuit in Buriram and intense heat which dramatically affected track conditions.

Michelin had previously only visited the 4,554m Thai circuit for a pre-season test in February of this year and track temperatures had reached a high of 49°C, but today’s race got underway with the track thermometer reading 56°C, a huge increase that all had to try to manage. The extreme temperatures had not been forecast, because it is monsoon season in Thailand and from local knowledge the heat would have subsided at this time of the year. With this in mind Michelin chose a range of tyres before the season started – in-line with the regulations – that it believed would be ideally suited to the new venue. With the high temperatures the track had very little grip and this caused a lot of spinning, causing the Michelin technicians to advise all the riders to use the hard rear option MICHELIN Power Slick, which was heeded by the majority of the field, with just Aleix Espargaro (Aprilia Racing Team Gresini) choosing the soft version. With just a handful of riders opting for the medium front and the rest taking the hard, this still meant four of the six different compounds were in use during today’s 26-lap race, despite the conditions.

Marc Marquez (Repsol Honda Team) began from pole this afternoon and got the holeshot to lead after the first-lap. He held this position for the first four-laps before Valentino Rossi (Movistar Yamaha MotoGP) passed him to take the lead, a ranking he maintained for the following six-laps. The next protagonist to hit the front was Andrea Dovizioso (Ducati Team) and he tried to gap the rest of the field by setting a number of fast and consistent laps. As the race wore on, Marquez closed him down and another classic battle ensued between the two. The lead changed hands many times through an exciting final few laps, before Marquez made a last corner manoeuvre stick and he took victory on-the-line from Dovizioso by just 0.115 seconds. Third was Maverick Viñales (Movistar Yamaha MotoGP) as he secured the final podium place, making three different manufacturers in the top-three. Rossi crossed the line in fourth and Johann Zarco (Monster Yamaha Tech 3) took fifth and the First Independent Rider position. Alex Rins (Team SUZUKI ECSTAR) was sixth, Cal Crutchlow (LCR Honda) narrowly edged out the fast-finishing Alvaro Bautista (Angel Nieto Team) for seventh, Danilo Petrucci (Alma Pramac Racing) took the flag in ninth and his team-mate Jack Miller (Alma Pramac Racing) followed him home to round out the top-ten.

The range of Michelin tyres selected for this weekend featured specific rear tyres, purposefully created for the Buriram circuit, all seven options of front and rear tyres (there were two versions of the rear medium available to all), were tried and tested by most riders, but with the extreme temperature the hard rear was considered the best choice and this was completely in-line with the advice given by Michelin to all riders and teams. This decision produced an exciting spectacle and enabled all riders to battle for positions throughout the entire race in front of a huge crowd of 100,245 that packed the grandstands around this fantastic facility, making a very colourful and vibrant atmosphere for all concerned.

Michelin and the MotoGP paddock will now briefly return to their respective home bases before heading back to Asia ahead of the three-week fly-away tour to Japan, Australia and Malaysia, which begins with the Japanese Grand Prix on Sunday 21st October.

“Today has been a very good day for us because in the championship we have increased the advantage and will have the first match-point in Japan. Apart from that we worked really hard this weekend in the hot temperatures and difficult conditions. It was very extreme conditions on the track and Michelin had brought a different kind of rear tyre and we adjusted the set-up to work with these. This was a good way for them to work for these extreme conditions and tyres worked well for the whole race. Everyone was trying to manage their tyres, as we expected a drop in performance towards the end because the tyres were spinning a lot on the track that was almost 60° in parts. I am happy and I will enjoy the victory and try to fight for the podium when we get to Japan.”

“This has been a very complex and demanding weekend. The tyres have been under immense stress due to the very high temperatures we have had here this weekend. When we came for the test we were told it would be wet and cooler for the race, so we decided on the range of tyres accordingly, but it has been the complete opposite. The riders tried the whole choice of tyres throughout the practice sessions and we thoroughly analysed the performance and durability of all compounds and we gave advice to all teams and riders – as we do at every race – as to what our recommendation was. This guidance to use the hard rear proved to be the correct one as the race was exciting with consistent lap-times and a great battle between Marc and Andrea at the end. The tyres performed well all race and despite the intense heat and the excessive spinning this caused on an abrasive track, we are happy with the overall performance. It is never easy to decide on tyres so far in advance, especially for a track we haven’t raced at before, but with the data from this year we will certainly be in a stronger position to decide on the allocation for Buriram before the start of next season.

“I would like to congratulate the organisers for such a good event, it has been a pleasure to come to race in Thailand for the first time, the people have been great and today was a superb atmosphere, we are already looking forward to coming back next year!

“Finally. I’d also like to say thank-you to all the teams and riders for listening to our advice and taking the appropriate action to make the first visit here such a positive experience.”