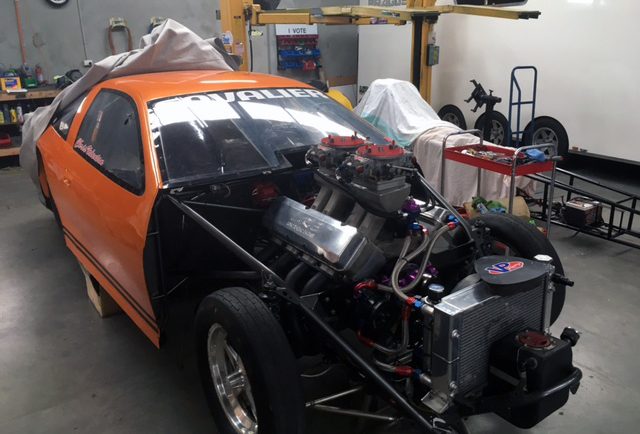 Previously a regular in Modified, Braggs is a door car person at heart and had his eye on the Top Sportsman bracket since it’s debut in 2015.

“Ever since they started Top Sportsman I always thought that was a class I could see myself in,” said Braggs. “Fast door cars are what I love.”

“Modified is a great class with a bunch of great racers but to be honest I could work out why it just didn’t do it for me as much as a door car, I think I miss doing big smoky burnouts.”

Previously belonging to NHRA Pro Stock driver Kurt Johnson, the Cavalier was brought to Australia and driven by Chris Valentan. It holds the current Super Stock A/AP ET and speed records at 6.943 set in 2008 at Perth Motorplex and 198.76 mph set in 2009 at Willowbank with a 500ci drce and gforce.

“I bought it turnkey but sold the motor and gforce,” he explained. “I have now put in a 555ci BBC and made 1092hp on the Reher Morrison Dyno.

“Matt at M.D.T Race Engines and Autos has done a killer glide for me. I’m hoping to go in the 7.6 range over the quarter mile.

“I’m going to try and get the car sorted and make it into a good bracket car. If that means I’m in the points at the finals then that’s a bonus.”

Top Sportsman is fast becoming one of the most exciting brackets in the Summit Racing Equipment Sportsman Series.

Mildura Sunset Strip will see another close field battle it out and Braggs hailed the quality vehicles on show any given race day.

“I think Top Sportsman is growing at such a rate mainly due to evolution in the sport. Cars are always going to get faster and 1000-plus horsepower is so easy and achievable now.

“Also the class is full of top quality cars. You look at the entry lists and its full of cars built by the best racecar builders in Australia. My Jerry Haas car is a work of art. The workmanship is unbelievable.

“Mildura… as per usual like most drag racers my car will be ready probably one hour before its time to leave (laughs). It will be its first run. I’ll take it easy then work things out from there.”

Qualifying for Round 3 of the Summit Racing Equipment Sportsman Series at Mildura Sunset Strip commences from 10am – 5pm on Saturday October 22. Cut throat elimination racing begins from 11am – 4pm on Sunday October 23.