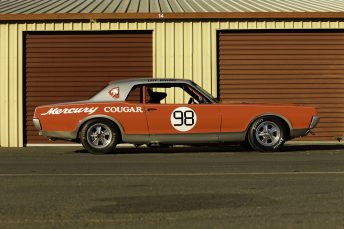 The long-awaited debut of Len Balme’s 1967 Mercury Cougar will be the highlight of a 15-car grid at round three of the Performance Wheels Australian Trans-Am Series, to be contested as part of the 2 Days of Thunder meeting at Queensland Raceway this weekend, June 17-18.

Believed to be the circuit racing debut of a Mercury Cougar in Australia, Balme recently took to the Paperclip for a shakedown in his mount ahead of his debut, an occasion he is looking forward to after a build that was two and a half years in the making.

“We chose the Mercury Cougar because it was different, it looks good in race trim and powered by Ford, and I also haven’t seen another one here,” Balme said.

“The colour scheme is of the Bud Moore Racing Cougars of 1967 which gave a good challenge to the factory Mustang team in the Trans-Am Series.

“My goal for the weekend is to get out and run the car in, but more important to get track time in for myself.

“I would like to say thanks to all the other teams with their advice and pointing us in the right direction for this build.”

The return of 2016 Australian Trans-Am Trophy Series runner-up Brett Curran in his Ford Mustang and Australian Trans-Am stalwart John Samios in the Fataz Competition Engines-prepared Chevrolet Camaro will add to the action at the pointy end of the field.

A faultless performance by Shannon O’Brien saw him extend his championship lead at the second round of the series at Queensland Raceway, while Tony Rutherford (Sportsman Series) and Gareth Jones (5 Litre Classics) will also be looking to build on their respective class leads at the third round.