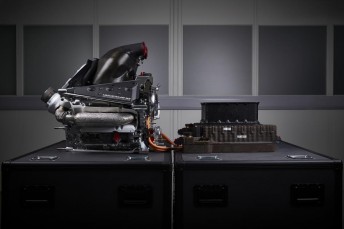 Mercedes-Benz is proud to announce that Mercedes-AMG High Performance Powertrains (HPP), Brixworth, has been awarded the coveted Dewar Trophy for its PU106A Hybrid Formula One Power Unit.

The Royal Automobile Club’s Dewar Trophy is only awarded in years when the Club’s expert committee believes that there are contenders of sufficient merit, with winners joining a remarkable line-up of automotive greats.

In a year which marks the 150th anniversary of the birth of Thomas Dewar, 120 years of motorsport success for Mercedes-Benz and the advent of a new technological era for Formula One, the award stands as a fitting tribute to a long and rich history of automotive innovation for the three-pointed star.

The team at HPP was recognised for its development of the most advantageous powertrain within the new Formula One regulations. The aim for 2014 was to raise the engine efficiency from around 29% for the previous normally aspirated 2.4 litre V8 to better than 40% with the new 1.6 litre V6 Hybrid turbo.

The successful design, research and teamwork resulted in the Mercedes-Benz PU106A Hybrid Power Unit, which has not only been the dominant powertrain in this first season under the Formula One rules, but is also one of the most thermally efficient gasoline powertrains ever produced.

For Mercedes-Benz, the association between hybrid technology and motorsport stretches back over a century, to the Mercedes Mixte race car of 1907. This employed a serial hybrid drive incorporating a gasoline engine and a dynamo that converted the energy of the engine into electric energy: subsequently supplying power to two wheel hub motors on the rear axle. 102 years later, the Mercedes-Benz KERS Hybrid system powered Lewis Hamilton to the first ever Hybrid Formula One victory at the 2009 Hungarian Grand Prix.

The lessons learned during this cutting-edge engineering have already benefited the passenger car industry, through projects such as the SLS AMG Coupe Electric Drive and the latest range of Hybrid and Plug-In Hybrid vehicles from Mercedes-Benz, such as the S500 Plug-In Hybrid.

The fourth and most recent Dewar Trophy awarded to a member of the Formula One community prior to this year went to the team at Brixworth (then known as Mercedes-Benz High Performance Engines, or HPE) for its pioneering work on the KERS (Kinetic Energy Recovery System) Hybrid unit that was introduced for the 2009 season.

Prof. Dr. Thomas Weber, Member of the Board of Management of Daimler AG responsible for Group Research and Mercedes-Benz Cars Development
“Winning the Dewar Trophy is the result of hard and excellent teamwork. Formula 1 is the most intense development laboratory in the world: new technologies are pursued vigorously and quickly, more than in any other development environment worldwide. In the course of this, it is paramount to pay maximum attention to every detail and, at the same time, deliver an integrated high-tech package. This is precisely the strength of Mercedes-Benz. There is a reason why the new S 500 PLUG-IN HYBRID is the first luxury sedan with the performance of a V8 and yet the consumption of a compact vehicle. And this marks only the beginning of our strategic hybrid initiative: by 2017 we will have introduced up to ten new Plug-in Hybrid models on the market.”

Andy Cowell, Managing Director, Mercedes-AMG High Performance Powertrains
“It is an honour to accept the Dewar Trophy on behalf of my colleagues at Mercedes-AMG High Performance Powertrains and on behalf of Mercedes-Benz. To have received this prestigious award for the second time is a fitting tribute to the commitment to excellence within our organisation. Our work in the constantly evolving arena of Hybrid technology has allowed us to explore an exciting new breed of automotive innovations relevant not only to our performance on the racetrack, but also to the everyday motorist. As a sport, when we took on the challenge of the radical new regulations introduced for the 2014 Formula One season, few could have foreseen that such performance could be achieved so quickly. It is a testament to the industry – and particularly to the hard work of the hundreds of people at Mercedes-Benz – that those incredible efforts over the past three or more years are being recognised today. It gives me great pride to represent and to be a part of such a talented group of individuals, working together as a team to reach new heights in engineering excellence.”