Mercedes-AMG Tales from the paddock

Mercedes-AMG Tales from the paddock 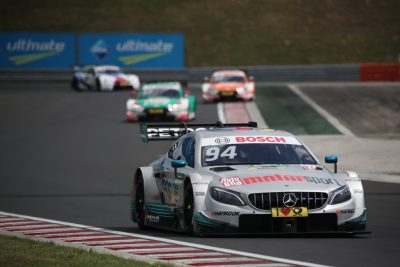 Good and bad luck are never far apart in racing, especially when a championship is as strongly contested as the DTM. Pascal Wehrlein describes how this has affected the first races of his DTM comeback and what his expectations for the Norisring are.

Instalment 1 of the triple-header: The French Grand Prix is back on the itinerary! Next weekend, Formula 1 returns to ‘La Grande Nation’ for the first time since 2008. The 59th French Grand Prix takes place on a familiar yet new track – the totally revamped Circuit Paul Ricard at Le Castellet. Although the team in its current incarnation is competing in France for the first time, the Silver Arrows have already celebrated success there, the first occasion being 1954 in Reims. That was when the legendary Juan Manuel Fangio and Karl Kling driving the W196 secured a one-two win. Mercedes-powered cars have registered a total of two victories and ten podiums in the French Grand Prix. Lewis has already had success on French soil, namely at Magny Cours where he competed twice and made one podium appearance. The teams will need to pack their gear up especially quickly at Le Castellet, because the second part of the first triple-header in F1 history – the Austrian Grand Prix – is due to take place the following weekend. The back-to-back programme continues with the British Grand Prix at Silverstone one week later.

Norisring, here we come: But it’s not just Formula 1 on the bill next weekend. The Mercedes-AMG Motorsport DTM Team will also be competing in two races at the Norisring, which many fans consider to be the highlight of the season. Since the brand with the three-pointed star secured its maiden victory on the streets of Nuremberg in 1989, the Norisring has proved to be a happy hunting ground. A haul of 18 winners’ trophies makes Mercedes-AMG Motorsport the most successful manufacturer on the street circuit in Nuremberg by a wide margin. Between 2003 and 2015 alone, the team registered 13 victories on the boulevards alongside the Dutzendteich lake. The team’s last two Norisring victories went to Pascal Wehrlein and Robert Wickens in the 2015 season. After two years without a win and with this being the 30th anniversary season, the team are determined to revive their fortunes on the Norisring.

One-two victory for the SLS AMG GT3 in New Zealand: Customer sports team MIKE Racing celebrated a one-two finish in the ENEOS North Islands Endurance Series for their number 96 and number 16 gullwings. Pole-sitters Reid Harker and Jack Milligan (both NZL) mastered the difficult conditions caused by heavy downpours and frequent safety car deployments to secure a lights-to-flag victory at the end of the three-hour race. Their team-mates Brendon Leitch and Christina Orr-West (both NZL) moved up two positions from fourth on the grid after the field was well and truly reshuffled by all the pit stops, finishing second only nine seconds behind Harker and Milligan. This was enough for Leitch and Orr-West take the lead in the drivers’ championship; the duo had already finished fourth in the season opener at the Hampton Downs Motorsport Park (NZL). The third and final race of the season will take place on 21st July at the Circuit Chris Amon near Manfeild.

Pascal, after the first three race weekends, you are eighth in the championship. The incidents in the second race in Budapest cost you valuable points. How difficult was it for you to come to terms with that?
Pascal Wehrlein: Very difficult, but I’m trying to channel the anger into positive energy. Going into next weekend, I’ll be telling myself that the moment has come. But the safety car and the red flag were something over which I had no control. I would be more annoyed with myself if I thought my performance was at fault. But that doesn’t mean that I was not annoyed about what happened. All that matters for me now is the upcoming weekend at Nuremberg. I’ll be trying to pull out maximum performance, and maybe this time luck will be on my side.

There are still 14 races to go, and you are just under 50 points behind the leader. How decisive is the Norisring weekend for the rest of your season?
Pascal Wehrlein: No more and no less decisive than the ones before or after. Every weekend there are 56 points up for grabs, and you’ve seen how fast the situation can turn around. On the first two race weekends, BMW were very strong, and at the Hungaroring they only scored so highly on Sunday because of all the incidents. Otherwise, they would have had difficulty finishing in the points at all. Anything can happen in the DTM, and from one weekend to the next, you can quickly close the gap or fall behind by 30 or 40 points. Every weekend is important, from the first through to the last.

You have had two front row starts so far and you’ve done your fair share of overtaking in the races, so overall things are looking very good for you. Where else do you think you could improve?
Pascal Wehrlein: In Budapest, I showed for the first time that I’m on a level where I’m capable of winning races. This definitely wasn’t the case on the two previous race weekends. The Lausitzring was obviously a bit better, with my first podium of the current campaign, but even there I wasn’t quite up to winning form. Budapest was another step forward, and I expect to make progress again over the next couple of weekends. In addition, I need that extra bit of luck which was missing in Hungary when I had my problems in the first race. So all things considered, we’re getting there. I have the motivation to notch up my first race win soon.