Mercedes-AMG Motorsport scores class wins in the US and France

Mercedes-AMG Motorsport scores class wins in the US and France 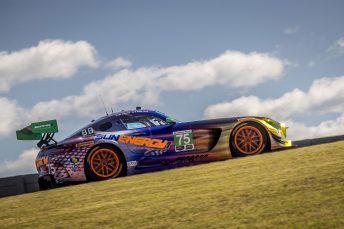 Mercedes-AMG Motorsport continues its success story in the IMSA WeatherTech SportsCar Championship: the Mercedes-AMG Team Riley Motorsports won the Sportscar Showdown at the Circuit of The Americas in the GTD class. Thus, the Mercedes-AMG GT3 is on the podium as the winner in the most important North-American sports car series for the third time in a row. Customer Racing Team SunEnergy1 rounded out the third double podium in a row with its third-place finish. In the 24-hour race at Circuit Paul Ricard, Hofor Racing claimed its third class win of the year in the 24H Series.

Austin (USA) – In its debut season in the IMSA WeatherTech SportsCar Championship, the Mercedes-AMG GT3 continues to score one success after another: the Circuit of The Americas was the venue for the fourth round of the season. In Austin, the Mercedes-AMG Team Riley Motorsports secured its second victory of the season and already its fourth podium finish in the GTD class. During the Sportscar Showdown in Texas, Ben Keating (USA) and Jeroen Bleekemolen (NED) raced the Mercedes-AMG GT3 with starting number #33 across the finish line after 2h41m50.148s and won with a margin of 2.039 seconds. Thus, the Mercedes-AMG GT3 is on the podium as the winner in the most important North-American sports car series for the third time in a row. Its repeated victory enabled the US team to further extend its lead in the drivers’ and teams’ standings. With Customer Racing Team SunEnergy1 Racing finishing in third place, two teams with the Mercedes-AMG GT3 were on the podium for the third consecutive time. Tristan Vautier took over the #75 Mercedes-AMG GT3 from Kenny Habul (AUS) while in 15th place and ended his impressive progress in third place, 3.450 seconds down on the winners. After the first four rounds of the season, MercedesAMG Motorsport has scored a total of seven podium finishes and is leading in the manufacturers’ standings.

The Riley Motorsports – WeatherTech Racing team scored another top ten finish in the GTD class, the largest in the field at 17 entries. Cooper McNeil and Gunnar Jeannette (both USA), the winners of the last event at Long Beach, finished in sixth place.

Tristan Vautier, SunEnergy1 Racing #75: “The car was fantastic throughout the week. When I got into the car in 15th place, I knew that we were really fast and that it would be possible to overtake on track. I never gave up and I was determined to make up one place after another. I really enjoyed that it worked out so well. It is our second podium and that with a new team, that is great. Just like the support that we are getting from Mercedes-AMG Customer Racing.”

Hofor Racing remains on the road to success in the 24H Series: after 575 laps in the 24-hour race at Circuit Paul Ricard, the Swiss team finished fifth overall and claimed victory in the A6-Am class. Roland Eggimann (SUI), Christiaan Frankenhout (NED), Kenneth Heyer (GER), Chantal Kroll and Michael Kroll (both SUI) started the race from eleventh place on the grid and worked their way up with faultless stints and consistently fast lap times. After their third class win from four races, the reigning drivers’ and teams’ champions remain on course for the title defense.

ROFGO Racing made its debut with the Mercedes-AMG GT3. With eighth place, the new team scored a top ten finish in France straight away.

Kenneth Heyer, Hofor Racing #1: “Such a 24-hour race is tough and demanding. After third place in the last race, we wanted to score another class win. We managed to do so and that is making us very happy. The handling of the Mercedes.AMG GT3 on the track was great and we pushed as hard as we could. Racing with the team and the team-mates simply is fun. We keep our eyes on the title defense and we are already looking forward to the upcoming races.”