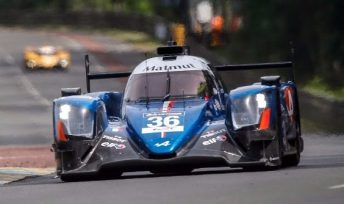 Gustavo Menezes is ready to fight to defend one of the most coveted trophies in international motorsport later this month, following a positive and productive ‘dress rehearsal’ for the legendary Le Mans 24 Hours.

Menezes stunned the sportscar racing fraternity last year by speeding to LMP2 class victory at La Sarthe as a rookie, alongside team-mates Nicolas Lapierre and Stéphane Richelmi. The talented young American will be the only one of the race-winning trio to return to the cockpit of the N°36 Signatech Alpine Matmut entry 12 months on – now partnered by Romain Dumas, a man with two outright triumphs to his name at Le Mans, and newcomer Matt Rao – and his sights are firmly set on replicating his stellar 2016 result.

Behind the wheel of the 600bhp Alpine A470 prototype, Menezes, Dumas and Rao took it in turns to lap the ultra-fast 13.629km French circuit during the course of the official test day, with the highly-rated Santa Monica, California native completing 28 tours as he outpaced multiple grand prix-winner Rubens Barrichello amongst a whole host of fiercely competitive adversaries.

In ideal weather conditions, the primary focus was on long runs, aerodynamic evaluations, tyre durability comparisons and race set-up. Whilst single-lap form was not a major preoccupation, the Alpine A470 did display consistently strong pace on both new and used rubber, as Nelson Panciatici in the N°35 sister car topped the timesheets with a new class lap record – at an average speed of an eye-watering 235.72km/h.

Menezes was denied the opportunity to challenge that benchmark by traffic – with the N°36 Alpine ultimately placing eighth amongst the 25 high-calibre LMP2 protagonists and 14th out of 60 overall – but the 22-year-old Williams-Harfield Sports Group protégé was nonetheless greatly encouraged by both reliability and performance as preparations intensify for the 85th edition of the iconic round-the-clock classic on 17/18 June.

“The test day went well,” affirmed the reigning FIA World Endurance Championship (WEC) LMP2 title-holder. “It’s fantastic to go back to Le Mans and our speed looked good straight out-of-the-box. With everybody following their individual agendas, it’s tricky to ascertain the true pecking order at this early stage – but one thing for sure is that it’s insanely close in LMP2.

“The N°35 car put in a great lap, which proved the potential of the package we have and that’s promising because our pace was very similar but we just never got a clear run to show it. We concentrated on our own technical programme, played around with a variety of different set-ups, came away with plenty of useful data and – most importantly of all – worked well together as a team.

“At Le Mans in particular, you can really feel the extra downforce and power in LMP2 this year because the long straights allow the cars to properly stretch their legs. The Alpine A470 felt incredible to drive round there – more like a single-seater than ever before. We were hitting top speeds in excess of 330km/h, which was very impressive and in a non-competitive session, Nelson was already eight seconds faster than last year’s best LMP2 qualifying time – meaning we’re likely to be even quicker come the race weekend itself.

“We still have a bit more work to do, of course, but I think we’re in reasonable shape and I’m really excited to return next week. The team and Alpine have placed their trust in me, and I want to reward them for that by fighting for the win again. The clear objective is to keep up my 100 per cent record at Le Mans and whilst that obviously won’t be easy, nothing worth having ever is – so bring it on!”

“It was a very positive day,” echoed Alpine Deputy Managing Director Bernard Ollivier, “with a lot of work completed by the team and some superb performances. They say it’s only testing and it’s true that we don’t necessarily know the strategies adopted by our rivals, but I think we can safely say we have the potential to successfully defend our victory.

“Le Mans is the most important race of the year, and not just because there are double points on offer towards the FIA WEC standings. We want to live up to the achievements of last season, and we came away from the test with a lot of confidence that we can be a force to be reckoned with again.”