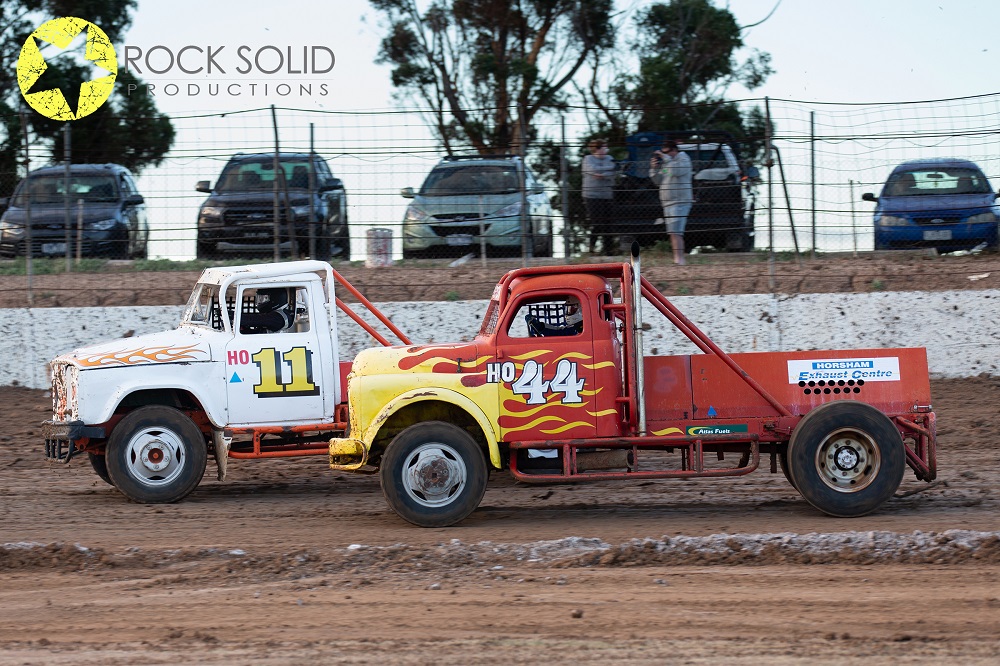 This Saturday night is memorial night at Blue Ribbon Raceway in Horsham with the annual Limited Sportsman Kev Baker Challenge and the Robin Thomas Memorial for V8 Trucks scheduled as the main events supported by Production Sedans, Wingless Sprints and the demonstration Vintage Sedans and Hot Rods.

The V8 Truck Robin Thomas Memorial honours a late former Kalkee farmer who took to the speedway back when the track opened back in 1996. Thomas worked hour after hour for the operating Horsham Speedway Club and his son Dean Thomas became a racer at the track as did Robin in of course the V8 Truck class. Thomas took pleasure in seeing everybody have fun.

Suzanne and Robin made sure the club canteens operated with the best food and that the food and drinks flowed out the counter window at a fast rate to contribute to the club profits, which of course are put straight back into venue operational costs and providing the next entertaining speedway show weeks later.

Another feature of Thomas’s generosity and commitment was his service of welding and engineering in his own farm workshop to help fix or build race cars. Thomas was a Vice President, a President and a Life Member then add track manger, water truck driver, crane truck operator, push Ute driver, grader driver and driver of pretty much every vehicle the club had.

This Saturday night our V8 Truck racers will be honoured to be the winner of the Robin Thomas Memorial.

The Limited Sportsman Kevin Baker Memorial has attracted a number of Victoria’s best competitors of the class including the current South Australian and Victorian champion Jock Baker, no relation to Kevin. Troy Curran, Travis Matthews Stephen Purchase and Rod Hetherington all Horsham member racers are also committed to the race as are the likes of Mal Seily from Bairnsdale the current Victoria 3 and Bowen Donkers from Portland the current Victoria 2 competitors.

There will be sensational action for all to enjoy with everybody gunning for the big win in front of the so far this season unstoppable Jock Baker.

Competitors will be honouring Kevin Baker who was always a tremendous supporter of the class who fully endorsed giving everybody at either end of the class a fair go and putting on entertainment for the fans who pay very hard-earned cash to watch race drivers get their kicks. Baker himself was a competitor in the class as was his recently retired race driving son Clint.

The top qualifiers in this weekend’s event will have to start at the rear of the field in the final and try to find their way past everybody ahead of them to win the big race. If you have not seen the best drivers in the class you will be thrilled watching these talented race drivers working their way forward slicing and dicing past developing drivers and those that just race within their abilities for the fun of it.

Expect at least five or six of our top Limited Sportsman drivers working their way forward and potentially one of them will take the lead and the win in the Kevin Baker Challenge Trophy.

Our Production Sedans is a class that is growing locally with a renewed interest and whilst some of our drivers are unavailable this weekend, those that will battle with Dehne Sparrow one of Australia’s best and Steven Aldridge who looks to have a great handling car also. Shaun Queale and Dean Hughes will represent Horsham.

Wingless Sprints have joined the programme also with Steven Hateley and Jeremy Beddison in particular representing the Wimmera against the likes of Mark Walsh, Kelvin Johnson, Robert Whiteside, and James Rodda.

If you like your entertainment a little less serious, then the demonstrating Vintage Sedans and Hot Rods should give you a reason to smile as we watch some of those Sedans and open wheelers that used to be at the front of our speedway classes back in their day.

All the action is at 1650 Blue Ribbon Road, Kalkee with racing from 5.30pm. Gates to the public will be opened at 3.30pm. The Pit Entrance for competitors will be opened from 11am.