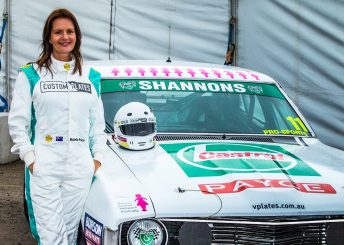 Race driver Melinda Price will be taking a trip down memory lane when she competes at Melbourne’s historic Sandown Raceway this weekend as part of the Sandown 500 endurance race meeting.

It’s 20 years since Melinda was part of the high-profile Castrol Cougars, an all-female team that contested the Sandown and Bathurst endurance races in 1997.

“I had raced at both tracks before the Cougars, and I have since, but it is just fantastic that I get to race these two great circuits, at two of the biggest events in the Australian motorsport calendar, on the anniversary,” Melinda says.

Being able to celebrate this special anniversary has extra significance for Melinda, who this year also passed the important five-year ‘all clear’ mark after a battle with breast cancer.

It was 2011 when the now 46-year-old was diagnosed. She was eight months pregnant with daughter Lily.

“I had my first surgery when she was seven days old. I didn’t really have time to feel sorry for myself because I had this beautiful little baby to take care of, and she put a smile on my face every day. And the good thing about chemotherapy is that I have forgotten most of the awful part!” she laughs.”

Fittingly, Melinda has teamed up with Breast Cancer Network Australia and the group’s logo will be prominent on her 1974 XA GT Ford Falcon. It’s a new partnership, but obviously a cause she is passionate about.

“I was lucky to get through it and be given a second chance to live my dreams. I’m very grateful for that, and if I can put some smiles on the faces of other people who are going through it, and help them by taking them for rides, or raising funds or whatever I can do to raise awareness about what BCNA does, then that will be fantastic. It’s a way of giving back for all the support I had.”

BCNA joins Melinda’s major sponsor, VicRoads Custom Plates, which named her earlier this year as an ambassador for its ‘Keep It On The Track’ and off the street road safety initiative. It’s another great match given her passion for driver education and the right of every road user to get home safely.

Melinda is competing in the Touring Car Masters series, a support category to the iconic Sandown 500 Supercar endurance race, The car – known as ‘Berta’ – will also carry signage from her product sponsor, Momo, which has provided protective clothing and race wear, while motorsport history buffs will notice that Castrol is celebrating the anniversary, with a retro logo on the bonnet.

And in line with the family support Melinda has always enjoyed, there are two other new sponsors on board – Echuca-based concrete pouring company, Pro Pump, and Albury-based environmental consultancy. Vantage. The companies are owned by two of Melinda’s cousins.

As part of a family with strong ties to motorsport, Melinda first started racing go-karts at the age of nine, before progressing into the senior categories, amassing a vast collection of achievements and trophies along the way.

One result she is extremely proud of is that she and Castrol Cougars teammate, Kerryn Brewer, still hold the record for the highest placed all-female team to compete at the Bathurst 1000. They finished 11th outright.

Melinda lives in Melbourne’s Bayside area. She has an honours degree in immunology but is now studying to be a naturopath. Once qualified (at the end of 2018), she hopes to work in oncology, supporting cancer patients through their treatments.