Melbourne Kart Centre took thirteen drivers across eight classes to the second round of the Victorian Country Series at the Portland Kart Club over the weekend. After round wins at the opening round the team were looking at making another strong showing. 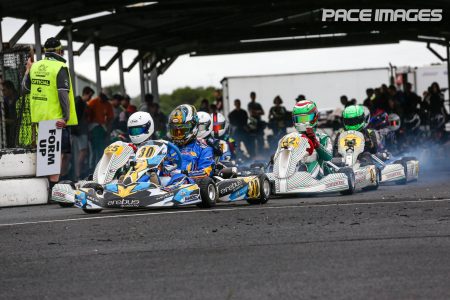 Phil Smith and Peter Gigis got the Melbourne Kart Centre team off to a great start on Saturday afternoon qualifying locking out the front row with Smith taking pole position and Gigis out of position two. Smith took both of the opening heats with a DNF hurting Gigis in heat 2. Smith was able to take a clean sweep taking out the final and Gigis fought back into the top five in fourth setting the fastest lap of the race on the way.

Cadet 9 was another class that Melbourne Kart Centre got off to a strong start in qualifying with William Calleja, Matthew Basso and Will Brinsley looking strong. Melbourne Kart Centre were again able to lock out the front row with Calleja putting his entry on pole position over Basso in second and Brinsley in fourth on the outside of the second row. All three drivers battled inside the top four in the heats with Calleja taking out heat 1. After an exciting fast final race Matthew Basso was able to open up a margin and take the win and the round win over William Calleja in second. William Brinsley come home in fourth in the final just missing the podium.

Cadet 12 had three Melbourne Kart Centre representatives in round one winner Cadel Ambrose, Xavier Avramides and Joanne Ciconte. Avramides and Ambrose were both in the thick of the battle for pole position both in the top five for the entire session. Avramides was able to qualify in position three on the inside of the second round with Ambrose in fifth. Ciconte just missed the top twenty in position twenty one looking for plenty of improvement. In the heats Avramides and Ambrose were able to stay around the top five while Ciconte improved in both heats from her qualifying position. In the final Ambrose was able to come away on the podium for the second consecutive round in second spot gaining good championship points with Avramides just missing in position four. Ciconte improved all weekend and made her way into the top twenty by the end of the weekend coming home in position eighteen.

Ross Stubbs, Jobe Stewart and Curt Sera were the other three senior drivers competing for the team with Stubbs taking out a clean sweep in VIC combined light. Stubbs was able to put his kart on pole position and after getting challenges in all three races was able to hold on for the clean sweep and round win. Jobe Stewart also put his Melbourne Kart Centre on pole position in KA3 Senior Light. Stewart didn’t leave the top three in all three of his races coming home with a podium finish in third spot. Sera missed the window in qualifying starting out of position twelve for the heats. Sera fought back in the heats coming home with two top five finishes in fourth and fifth but a good final result didn’t happen due to a first lap incident resulting in a DNF but Sera showed just how much pace he had.

Melbourne Kart Centre owner and manager was happy with the results from the weekend.

“It was a great weekend, to come away with three class wins and multiple podiums was a great result. We will continue to build on this round for the rest of the series”.

Sera’s Melbourne Kart Centre crew will next be on the circuit this weekend for the second round of the Australian Kart Championship in Newcastle.