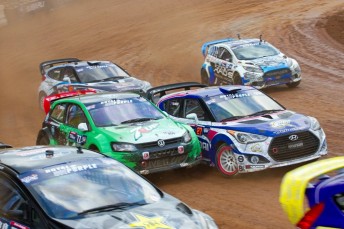 Emma Gilmour in her Rhys Millen Racing Hyundai Veloster Turbo mixes it up with the other Red Bull Global Rallycross drivers at the Charlotte round this weekend. Pic: Matt Kalish

Emma Gilmour had a rough ride at The Dirt Track in Charlotte, with mechanical issues hampering her Rhys Millen Racing Veloster Turbo’s performance most of the weekend.

She missed out on a place in the final but learned more about the car set-up.

“Despite our mechanical problems limiting our seat time I am enjoying the racing and getting more confident mixing it up with the guys each GRC round,” Emma says.

The fifth round of the Red Bull Global Rallycross Championship started off with Emma only 1sec off her team owner and boss Rhys Millen. She pulled that back to 0.7sec in the next practice, before she then lost boost.

It was a wild ride out there, Emma says.

“The track was so rough and then they watered it down, so it became like ice. My head has been rung like a pinball so many times within the seat wings going over the rough ground.”

Emma had throttle problems in qualifying and was only able to record one flying lap. Her team changed the turbo, hoping for a better result in the first heat.

“The boost hose came off again in heat one. The second heat was a struggle too and the team later found that the front strut had blown, which wouldn’t have helped the handling,” Emma says.

It was the semi final when everything started to turn in her favour.

“I had an awesome start and got up to fourth after starting seventh on the third row. I battled with Nelson Piquet Jr and Scott Speed but missed out and finished sixth.”

The last chance qualifier was a tough one, with Emma lined up against Millen, plus Speed, Piquet, Patrik Sandell, Bucky Lasek and Austin Dyne.

“We had made some set up changes which were unfortunately not quite right but it was still fun racing. Rhys, Patrik and I missed out on the final, so it will have to be the next event where I make my first final.”

“I just want to thank my engineer and team for all their hard work, keeping the car going for me over the weekend.”

Emma returns home tomorrow and has a month back in New Zealand, before Daytona (August 22-23) as the Detroit round of the GRC scheduled for next weekend has been changed to a two-round event at Los Angeles on September 20 and 21.