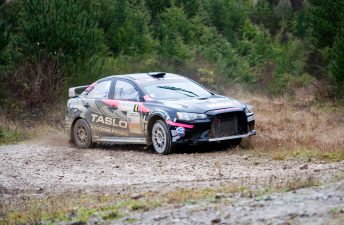 Rally Canterbury was all set to be a top event for Sloan Cox and co-driver Sarah Coatsworth. Following a successful test session on their home town forestry roads and well prepared for a wet and slippery rally, the Cox Motorsport team felt good coming into Rally Canterbury, ready to redeem some valuable championship points. However the Cox Motorsport team have been left disappointed again after being let down by the reliability of the Taslo Engineering Mitsubishi Evo X.

The event started well with a great reconnaissance of the rally roads and the team had confidence in the stage notes they had written to continue the top speed they displayed at this event last year. The team went into the first stage of the event knowing it was going to be slippery but they were surprised at how wet and slippery it actually was. Cox backed off more than he wanted to, in order to get to the end of the stage and managed fifth through the stage which he felt was a great start knowing he had taken it easy.

Unfortunately the rally was to come to an end for the team in stage two. The car lost all boost causing Cox and Coatsworth to stop 10km into the stage to check the car with the hope it would be an easy repair. Nothing obvious was found and they carefully continued to try and get out and back to the service park, hoping to get the car fixed. However the pairing had to stop again 5km from the end of the stage as the issue was worsening and the turbo had lost all of the engine oil. With the fault being linked to the turbo the team decided to temporarily withdraw and let the service crew assess the situation.

The crew worked hard on the car to determine the extent of the damage, unfortunately metal from the turbo was found at the entry of the motor and with the motor being at risk the hard call was made to withdraw from the rest of the rally. This was a very heartbreaking decision for the team as they had travelled a long way for this event and were hoping to get some good championship points and more experience for this rally next year.

The Cox Motorsport team are very gutted with how the weekend turned out and are upset that their rally ended so early. They will now turn their attention to Gold Rush Rally of Coromandel, Round Four of the New Zealand Rally Championship being held in Whitianga on Saturday 26th August. The two month mid season break will allow the team to regroup and with the highs and lows of rallying the team is hoping that the last three rounds which are closer to home will bring some highs for the Taslo Engineering Mistubishi Evo X and the whole Cox Motorsport team.