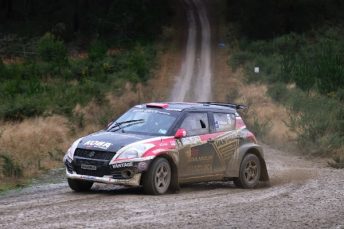 Hopes of defending her Lone Star Canterbury Rally win, were dashed early in the day, when Emma Gilmour’s Vantage Windows and Doors Suzuki Swift Maxi was not producing its normal power.

The 1600cc engine was down on boost right from the first stage of 10, in this third round of the Brian Green Property Group New Zealand Rally Championship.

“The car was difficult to drive and I didn’t have much confidence in the way it was performing in the slippery conditions. We ended up finding a crack in the intake manifold which meant the car couldn’t build any boost,” Emma says.

With snow on the tree-lined stages around the Ashley and Okuku Forests and “treacherous mud” to contend with, Emma, her co-driver Anthony McLoughlin and her team all decided on the difficult but ultimately most sensible decision, to retire after special stage six.

“Once we discovered where the leak was coming from, it was only going to get worse and we still had a long way to go in really difficult conditions, so we pulled the pin. I really dislike retiring as it would have been great to get to the finish but with the amount of time we were losing and the risk of further damaging the car, it made it not viable to continue,” Emma says.

Although obviously disappointed, Emma is now looking to use the championship’s mid-season break as a chance to get the car fixed, do some more testing and re-set for a more positive second half of the season.