Meakins wins Nyora Thunder Down Under round for SDAV Rods

Meakins wins Nyora Thunder Down Under round for SDAV Rods 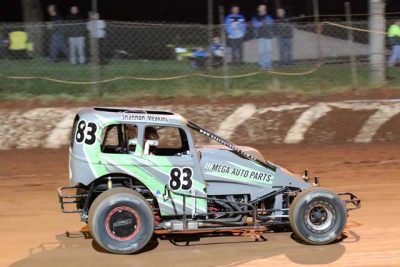 The SDAV Hot Rod club has held its latest race meeting at Nyora Raceway and Shannon Meakins took away another first placed trophy for the season when he finished ahead of Tom Marco and Michael Coad whilst others had a rough night on the dirt.

Amongst a packed schedule at Nyora with nine classes, three heat races awaited the SDAV Hot Rods with every driver all in on all races was the schedule for the night and then the feature event with positions decided by a coin toss.

Marco lead the field on lap one in the short little bull ring with Marco Snr, May, Matthey and Meakins the chasers. Meakins moved ahead of Matthey on lap two as Marco continued to lead. On lap seven Marco Jnr (Stich Concrete # 11) passed Matthey and at the finish it was Marco from Marco Snr, May, Meakins, Marco Jnr, Coad, Matthey, West, Lawless and Jenkins whilst Hovey didn’t pass the start line with brake issues.

West (Lumbar Softwoods # 4) who is a Gippsland local started pole in heat two with Jenkins beside him then Lawless, Coad, Meakins, Marco Snr, Hovey, Matthey, Marco Jnr, May and Marco. Coad from row two hit the lead on lap one and lead Marco Snr, Jenkins, West and Meakins.

Meakins moved forward a couple of spots the next lap passing Jenkins and West. Jenkins (Consolidated Signs # 3) dropped back through the field on lap three and Coad led the laps through to the end to defeat Marco Snr, Meakins, West, May, Matthey, Marco, Lawless, Hovey and Jenkins whilst Marco Jnr pulled out of the race on lap seven with engine issues.

Hovey was hoping for a change of fortune with a pole position start in heat three with May (Mega Auto Parts # 8) alongside then Coad, Marco Jnr, Meakins, Marco, Jenkins, Matthey, Marco Snr, West and Lawless.

Hovey started well leading lap one from Marco Jnr, May Meakins and Coad (Perry Bros Chassis # 55) however the field came to a sudden halt with a crash on lap two between May and Coad putting May out of the race with damage and Coad to the rear of the field penalised by stewards. The penalties didn’t stop there with Marco Snr (Stich Concrete # 5) being sent to the rear of the field with the stewards claiming he was still racing for too long after the caution lights came on for the incident.

Hovey continued to lead at the restart from Marco Jnr, Marco, West and Marco Snr who moved quickly when the green flag dropped. On lap four Marco Snr moved passed West, a few laps later Coad also got passed West. Things came un-done for Hovey on lap nine with Marco Jnr, Marco Snr and Coad all passing her whilst she held off Marco (Stich Concrete #m27) in fifth. West was sixth then Matthey, Lawless and Jenkins. Meakins didn’t finish with a puncture on lap two of the race.

A coin toss before the feature reversed the top qualifiers to the rear of the field for the race start.

Jenkins got the rub of the green as the poss moved him from last to first with Lawless (Purrfect Cool # 99) alongside then Hovey, Matthey, West, May, Meakins, Marco Jnr, Marco, Coad and Marco.

Lawless was quickest off the start and lead lap one from Jenkins, Meakins, Marco Jnr and Matthey. Meakins assumed the control of the race on lap two with Lawless handing the lead over. On lap four Lawless pulled out of the race not happy with the way the car was handling and on lap five Hovey dropped out with a flat tyre. Marco Snr and May passed Marco Jnr and moved into second and third before May spun out of the fight on lap seven.

On lap thirteen a tangle between Marco Snr and another racer put the two cars in the dirt, the stewards let the race continue as they believe the cars in the infield safely and would have put both to the rear of the field, this meant Marco Snr didn’t finish as he didn’t cross the line. The results were Meakins (Walt’s Wishes # 83), from Marco, Coad, May, Marco Jnr, Matthey and Jenkins.

Two race meetings remain for the season, this coming Saturday the 28th of April the Track Championships at Redline and then May the 12th at Rosedale Speedway.