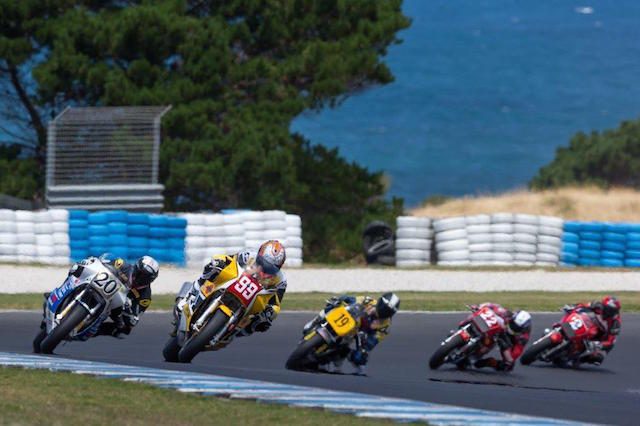 MEDIA RELEASE: The United Kingdom has held off a fast-finishing Australia to retain the prestigious International Challenge trophy at the 24th AMCN Island Classic.

With Jed Metcher (Harris Honda) and Shawn Giles (Katana) also performing strongly, Australia managed to claw back some points on the UK but it wasn’t enough to deny victory to the visitor for the third successive year – with the tireless veteran McWilliams also taking home the individual standings for the fourth time.

“Riders leave absolutely nothing in the tank at the International Challenge, and that’s what makes it so special to compete in and win,” said McWilliams, now 52 and showing little signs of slowing down. “We are allowed to ride bikes on the limit by the owners, and it’s been an honour to represent the UK and get the job done again in 2017.

“My teammate Peter Hickman is right when he says this is some of the hardest and toughest racing you’ll find anywhere, so that always makes winning extra special.”

Australia’s attempt to reclaim the International Challenge from the UK got off on the wrong foot when Irving Vincent-riding speedsters Cameron Donald and Beau Beaton were forced out of proceedings by mechanical problems on Saturday, while Phillis – who started from second on the grid alongside McWilliams – retired from race one with a flat tyre.

McWilliams won both races on day one, the first ahead of Giles and fellow UK rider Peter Hickman (Harris Yamaha), while in race two Hickman and Metcher completed the top three.

The UK then extended its lead to 26pts in race three, with McWilliams unstoppable en route to another win and a new lap record of 1:36.388. Hickman and Giles completed the top three.

With the event again going down to the wire, Australia sensed a sniff of victory after Hickman high-sided out of the lead at turn 10 on lap two, with McWilliams dropping a couple of places as he took evasive action.

However, with Aussie hard-charger Chad Hern (Harris Honda) out on the following lap with a broken cam chain it was then obvious only a calamity from a UK perspective would let Australia back into the game.

That didn’t eventuate, but the last few laps of race four were the best of the weekend as Phillis led while McWilliams was on a comeback mission after being held up in the Hickman crash.

The final lap was a nerve-jangler, and just when it appeared McWilliams was ready to make a move he got all loose a turn 10 which scuppered his chances of a clean sweep.

“I just went in too hot and the bike stepped out,” said McWilliams. “Alex is also exceptionally fast at turn 11 – and also at turns two and six for that matter! – so I knew that was it for me as far as pushing for the win.”

Phillis was elated, as he completed his rookie International Challenge campaign in the best possible way.

“I knew Jeremy was close behind so I just had to stay focussed and get on the gas as hard as I could coming out of turn 10 on that last lap,” said Alex, the son of Aussie superbike racing legend, Robbie. “I have really enjoyed riding the XR69, and I knew that once we had ironed out a few fuelling niggles I would give myself a great chance of pushing for a win.

“I also got a great start in the last race, so that always helps.”

Irish non-riding captain Mike Meskell was delighted with how his team performed.

“We had some good bikes and some not so good this weekend, but they held together and we have achieved our goal of getting closer to the top two teams,” Meskell said. “We want to be regarded as a serious competitor to Australia and the UK, and we will come back bigger and stronger in 2018 with better bikes, including two XR69s.”

American head honcho Dave Crussell said: Our bikes and riders finished every single race in 2017, which is a fantastic achievement. Our bike development has paid off, and I was particularly delighted with the form of Pat Mooney and Barrett Long.”

“We were a bit unlucky in that last race with Damien (Kavney) a DNF, but a couple of our bikes were really strong and we’ll be back to fight on again in 2017,” Coutts said.

In a massive weekend of historic competition, Murray Seabrook collected the Phil Irving Memorial Trophy for the most points collected by a competitor outside the International Challenge races. Seabrook defeated Dean Oughtred and Lachlan Hill.