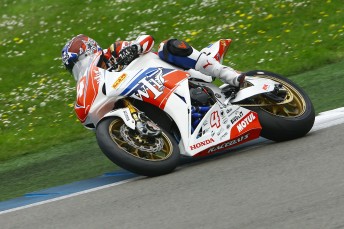 The Agro-On WIL Racedays Honda team of Kyle Smith and Joshua Day in the FIM Superstock 1000 European Cup, and Jake Lewis, Kevin Manfredi and Harry Stafford in European Superstock 600 are looking forward to this weekend’s (9-11 May) World Superbike meeting at the Autodromo Enzo e Dino Ferrari at Imola in Italy.

The team has now enjoyed podium success in both Superstock classes – Kyle Smith taking his Honda CBR1000RR Fireblade SP to third place in the opening round at Aragon in Spain (after ending last season with a STK600 win at Jerez) and Kevin Manfredi taking a spectacular second place at Assen last time out in only his second STK600 meeting.

Smith was unfortunate not to take second – and with it the championship lead – at Assen two weeks ago, when he was caught out by the wet conditions and then crashed again half a lap later due to a damaged rear brake lever.

Smith’s team-mate Joshua Day is already a race winner at Imola in STK600, and will be out to change his run of bad luck in the 1000cc class having been pushed down the race order twice now whilst avoiding other riders’ errors.

Last season’s European Junior Cup champion, Jake Lewis, and ex-GP racer Harry Stafford both crashed out at Assen but will be pushing for a good points haul at Imola. Manfredi, meanwhile, is targeting a repeat of his Assen success at Imola, his home circuit, and a move up the rankings from his excellent fifth place.

With ex-GP star Jeremy McWilliams now confirmed as team manager for the Agro-On WIL Racedays Honda outfit, the young riders have a wealth of experience to draw on, and are focused on continuing Honda’s success in these important World Superbike feeder classes.

McWilliams said: “I’m delighted to be working with Racedays Honda this season as it’s a natural extension to my role as coach to the young PATA Honda European Junior Cup racers. Our Superstock riders are all very talented and we’ve made plenty of progress over the first two meetings. Jake and Kevin have moved up from the European Junior Cup and have shown the high level of that series with very strong opening rides in STK600. Harry is coming back from serious injury and is making great steps forward every race.

“The Superstock 1000 team of Kyle and Josh have started much stronger than we envisaged,” he added, “given it’s the first season for us with the Honda CBR1000RR Fireblade SP. It’s fantastic to have two riders who can fully exploit the superb handling of this bike and we hope to continue pushing the established teams in Imola.”