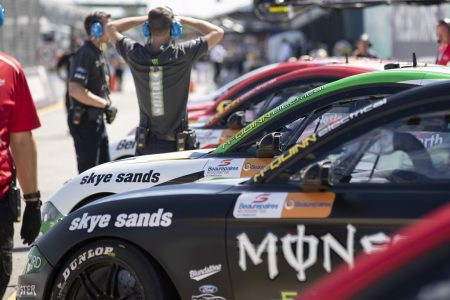 A long-time partner of the team and supporter of several of its drivers, McQuinn Electrical provides high quality and efficient electrical services to clients for a variety of projects across Australia. Company Director Colin McQuinn, who has supported several drivers including Cameron Waters, Chaz Mostert, and James Moffat over the years, is pleased to step up his involvement with the championship-winning organisation.

“We’ve enjoyed a great relationship with Tickford Racing over the past four years, so we’re very happy to continue our partnership with the team,” McQuinn said. “The team and drivers have been excellent ambassadors of what we do as well as great people to work with and be around. As a family-owned business we put a big emphasis on family values, and our relationship with Tickford has been very much like a family affair, and we’re looking forward to continuing that affair.”

The updated agreement sees McQuinn Electrical signage on all three Tickford Racing cars, driven by Lee Holdsworth, Waters, and Mostert, throughout the 2019 campaign. Team CEO and Team Principal Tim Edwards is happy to have one of the team’s most loyal partners elevating its involvement as the team experiences increased success in the early stages of 2019, claiming six podiums in the season’s first six races.

“McQuinn Electrical have been fantastic to have as part of the team, and we’re very happy to see them increase their role with the team,” Edwards said. “Not only have they supported us and a number of our drivers over the years, they have provided first class service on the many electrical projects we have as a business. Most importantly, Colin and the McQuinn family are a joy to have around, so we’re delighted to be continuing our relationship.”

Tickford Racing returns to the track this weekend at Symmons Plains Raceway, the shortest track on the Supercars calendar, for the Tasmania SuperSprint, taking place April 5-7.

Operating as a family company for over 40 years, McQuinn Electrical provides comprehensive electrical services for projects of all shapes and sizes. From home developments and lighting design to equipment hiring and business fit outs, McQuinn Electrical assures that its clients can expect quality work done within the timeframe, every time.