McPhee pushing for the podium in Montmelo

McPhee pushing for the podium in Montmelo 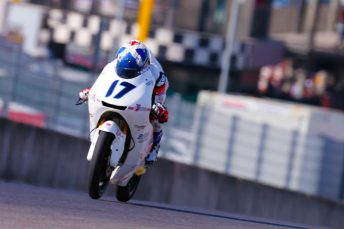 British Talent Team rider John McPhee took a solid P6 last time out at Mugello in one of the races of the millennium for Moto3™. With positions changing too fast to keep track and the timesheets almost inverted each lap over the line, the haul of points was certainly a good day’s work for the Scot.

Now it’s time to fire up the engines for the next race, almost on “home turf” – with McPhee having spent preseason in Girona, just north of the Circuit de Barcelona-Catalunya. The track is 4.7km long with 7 left handers and 9 right, and has a chicane added near the end of the lap for 2017 aimed at improving safety.

McPhee has been in the top ten at the venue before, and after some great pace and a great result at Mugello the goal is simple: try and get back on the podium and take more points. Now sixth in the Championship as it closes up and with the majority of the season still to go, it’s game on.

John McPhee: “The race at Mugello was great fun and it was good to be back in the battle and come away with a strong finish. Now it’s on to Barcelona, which we know will create a very different kind of race. This place feels more or less like a home race for me after spending all of my pre-season in Girona. So as always a podium is the target, but we’re also focused on taking as many points as possible. It’s a long year but things are already tight at the top!”