McPhee back on the podium after incredible ‘Cathedral’ comeback

McPhee back on the podium after incredible ‘Cathedral’ comeback 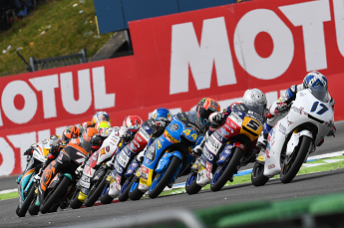 From nineteenth to the podium for the British Talent Team

John McPhee had a barnstorming Dutch GP for the British Talent Team, staging an awesome comeback from nineteenth on the grid to fight for the win – eventually completing the podium in P3.

Off to a slower start than the Scot wanted, McPhee only made up a handful of places initially before getting in the mix in the second group. As the race began to close up and eventual winner Aron Canet led the charge to catch the frontrunners, McPhee stayed with the Spaniard and was soon up into podium contention. Hitting the lead for the first time with four laps to go, the Scot prepared a final charge after the incredible comeback – challenging for the win on the final lap before crossing the line in third. From P19 to the podium, the gain was an incredible 16 places.

With the big haul of points in the bag McPhee is back in the top five of the Championship. The next stop is now Germany and the Sachsenring, as the grid head out for one last showdown next weekend ahead of the summer break.

John McPhee, P3: “After the weekend we’ve had I’m absolutely delighted to be on the podium, so happy for me and the team to pull this result out after such a tough weekend. The race was great fun – starting from nineteenth was quite difficult but we had the rhythm and the pace and we kept chipping away. I realised I was catching the second group and the second group were catching the leaders. So I kept on fighting away and with about five laps to go I thought I could even win the race and that we had a real good chance. I timed everything perfectly going into the last lap in Turn 9 and 10…I tried to pass Canet and then Canet and Mir ran wide, but to claim the last step on the podium I’m really happy.”