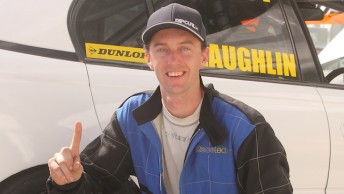 Talented NZV8 Touring Cars driver James McLaughlin rejoins the season this weekend at Manfeild Autocourse in grand fashion with a step up into the TLX category where he will take on defending champion Nick Ross and 2013 champion Jason Bargwanna.

Jumping into the seat of the 2013-14 championship winning Concept Motorsport Holden Commodore the Lower Hutt driver will be looking to come to grips quickly with the high-spec race car in Friday’s practice sessions held before qualifying on Saturday morning.

“I wanted to get into a TLX they look like a ot of fun so between my sponsors, my crew and Nick (Ross) we came up with a deal which suits everyone.” said McLaughlin.

“James McLaughlin Motorsport will be running the car and Sheldon from Motorsport Developments will be the engineer but we will still be in partnership with Concept Motorsport.” he said.

Although McLaughlin will be unable to make any significant impact on the title chase with just two rounds remaining he will however make great inroads on competing a full on campaign in the TLX category next season.

“We are in negotiation at the moment, I would like somebody to buy the other car before we move ahead but we are aiming to take ownership of a TLX car for next season.” said McLaughlin.

McLaughlin was unable to compete in rounds three and four held in the South Island after a crash in practice at Ruapuna left him with a slight concussion and major repairs needed on the Gree Airconditioning Holden TL.

However the Holden will be back in action this weekend with newcomer Adam Newell behind the wheel.

The Hawera driver will take on the NZV8 Touring Cars TL Championship drivers for the first time although he has much expereience at the Manfeild circuit.

“Adam will be jumping in and he has done a lot of laps around Manfeild and I used to race Super Sixes with him. My sponsor Carbo Glass have done an awesome job to rebuild the car and it’s actually better than it was before.” said McLaughlin.

Jason Bargwanna leads in the NZV8 Touring Cars TLX category over Nick Ross as the field head to the fifth round at Manfeild this weekend with Lance Hughes in third.

“Manfeild is a circuit we like and we had good pace there last year. It’s a big weekend for us with the home of Toyota just down the road. If we can get another good result there then it will take some of the pressure off for the last round at Pukekohe.” said Bargwanna.

The final race of the weekend will also see the full field of drivers compete for the Jason Richards Memorial Trophy.

Jason Bargwanna won it this time last year at Manfeild whereas Nick Ross won it the previous year when it was contested at Taupo Motorsport Park.

“It’s something Nick and I fight pretty hard for and something that is special for both of us.” said Bargwanna.

In the NZV8 Touring Cars TL Championship Auckland driver Kevin Williams has an extensive lead of 884 points and could mathematically wrap up the title this weekend with one round remaining.

Queensland based Kiwi driver Craig Baird, who was hindered with engine problems in the South Island, will be back on pace and looking for some race wins this weekend.

Although Baird is a fair way down on the table with 520 points after missing the round at Teretonga Park he will no doubt be pushing hard to fight his way up from fourth place.

The NZV8 Touring Cars will test on Friday 13 February but the real action gets underway with their qualifying session on Saturday morning at 11.51am followed by race one at 3.45pm.

On Sunday race two is at 11.04 with the excitement set to overload when the Jason Richards Memorial Trophy is contested in the afternoon at 2.22pm.