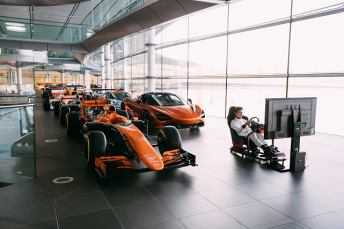 McLaren has confirmed the first qualifying event for its innovative gaming initiative World’s Fastest Gamer. Partnering with one of the strongest brands in world motorsport, Silverstone, this commitment reflects the high level of interest in gaming and esports amongst forward looking rights holders.

A four-week on-line championship open to competitors world wide will be broadcast from Silverstone after the Formula 1™ British Grand Prix in July. Gamers will compete using the dynamic, high end, easy access simulator platform rFactor 2. Qualifying will be open to all interested gamers with the top 20 drivers racing each weekend for points towards the Silverstone Championship.

Partnering with Silverstone, one of the strongest brands in world motorsport, this commitment reflects the high level of interest in gaming and esports amongst forward looking rights holders.

McLaren will announce three more ‘Official Qualifying Events’ for Worlds Fastest Gamer in the coming weeks with other third parties. To compliment the high end nature of rFactor 2 McLaren will authorise one mobile based qualifier and two more based on console platforms. In future years McLaren and World’s Fastest Gamer partner, IDEAS+CARS, will approve multiple stakeholders to hold ‘Official Qualifying Events’.

“McLaren group is proud to welcome Silverstone to World’s Fastest Gamer. We have great relationships with the guys there and know they have renewed plans to bring a new and younger audience to motorsport in the UK and beyond. McLaren is seeing many strong brands come to us to get involved in this new initiative. We only see interest growing from here.”

“This is another step forward for Silverstone as we seek to diversify into new motorsport opportunities. With the investment in the Silverstone Experience we made the first move towards bringing in a younger audience to our circuit and to motorsport generally. We expect World Rallycross to cement that move and of course Gaming was high up on our list of new platforms. Silverstone has been the home to GT Academy since its inception and we wanted to get involved in the next high profile Motorsport Gaming ‘Franchise’ from day one.”

“Silverstone has seen what gaming can do for its brand in the past and their new commitment will hopefully mean a flood of motorsport brands now committing to esports racing. The evidence is clear that gaming is a route for motorsport to engage more fans and engage the current ones better.

“Motorsports gaming is relentlessly closing down the gap to market leaders football and basketball and this is just the beginning; over the coming years McLaren and I envisage that multiple entities globally will hold ‘Official Qualifying Events’ for World’s Fastest Gamer. There is no better example of open competition in motorsport and it delivers the best job in esports.”