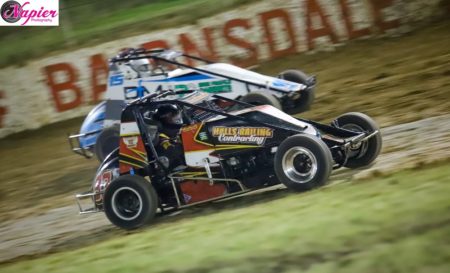 In his first season with his current Limited Sportsman race car purchased last June, Tim McKenzie has secured a win in the Bairnsdale Speedway point score for his division, surpassing his pre-season goal of a top three result along the way.

During the year McKenzie finished sixth at the state title, fourth at the King of the Rock feature event and third in the Bairnsdale 500 feature at the East Gippsland venue. Consistency in finishing races and finishing third to fifth on a regular basis helped contribute to his points tally securing him the seasons club championship.

Mckenzie went on to add “ In the new season, I aim to achieve this result again however it wont be easy. We have tough local competition though and we are a tight nit group willing to help each other as we grow the class again our side of the West Gate Bridge, it will be a challenge to try and win again, however cannot wait to test myself again.”

McKenzie is supported by fiancée Jodie and his family and wants to thank Trent Wilson and Mark Noonan two local Bairnsdale racers and who have also contributed to his success and fast tracking his knowledge of the race car he has and providing support regarding preparation and maintenance of the car.

“At the start of the season after I purchased the car, from some circles, there were some questions as to how I might go given the difference between my last car and the results in that car. Support locally from people like Trent and Mark was confidence building and each meeting I improved and have achieved a result even I didn’t think I was going to achieve. Thanks goes to those and others who encouraged me along the way.” McKenzie said.

Covid dependent, McKenzie should be racing again at Bairnsdale Speedway before the new year, either in November or December. Venues such as Horsham, Hamilton, Mount Gambier, Rosedale and Darlington are all potentially places the team will head to in 2022.