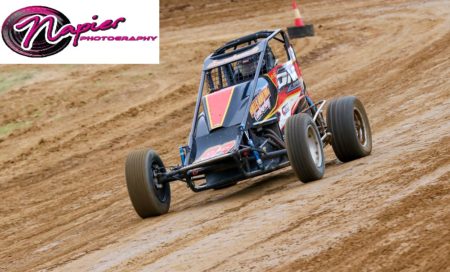 Bairnsdale based Limited Sportsman racer Tim McKenzie has hit his first goals of the season, winning a heat race and securing a podium result in a final at the recent Bairnsdale 500 event after seeing some gradual improvements in his racing at Bairnsdale Speedway over the past two race meetings.

On the back of a fourth place at the King of the Rock event earlier this year, McKenzie with competition from Troy Curran of Horsham and Trent Wilson and Matthew Hurley both from Bairnsdale, managed to finish in the third spot to earn his first trophy in his current race car.

McKenzie and his competitors competed in three heat races before entering the final event and McKenzie started the night with some expert help from the talented Dillon Siely who was competing in Sprintcars on the night as a driver. Siely has lots of experience in the Limited Sportsman and offered some assistance with the front set up of McKenzie’s car.

“To have Dillon give me a hand and for me to listen and understand what he was saying he was doing and why is valuable information I can now hold onto. I cannot thank Dillon enough; it was much appreciated.” Shared McKenzie.

McKenzie lined up on the dummy grid for heat one and almost did not make it out on track to race. After being informed he had a flat tyre, the Grid Marshall John Agosta and McKenzie’s fiancé Jodie Donelly went running to find a new wheel with tyre on it and raced back only to discover the holes in the rim on the tyre they brought did not match the studs. Thanks to nearby observant Sprintcar racer Mark Noonan who noticed what was going on, a wheel was brought over that could be slotted onto the # 93 car and McKenzie was able to start from position three.

McKenzie passed Matthew Hurley on lap five and moved into second and chased Trent Wilson to the finish line with Hurley in third, with lap times showing McKenzie second quickest during the race.

After the race McKenzie changed the front right wheel and took some cross weight out of the inside of the car to give more drive to the outside rear wheel and free up the back end of the race car a little at the same time.

Slated to start in pole position in heat two, McKenzie was keen to make the most of the slot and secure a heat race win. Things did not go according to plan to begin with, McKenzie spun out on the first attempt of lap one and was sent to the rear of the field by the race steward for the restart of the race.

From there with Wilson, Mark Both, Curran, Hurley, and Paul Hadden ahead of him, McKenzie pinned his ears back and set about the task. On lap one he passed Hadden, then on lap two passed Hurley and Both and Curran on lap three before whizzing past Wilson on lap five to win the eight-lap heat race and be the fastest on track by just .169 of a second, showing that others were really motoring along also.

In preparation for heat three, McKenzie and Crew Chief Donelly changed the tyre pressure on the front of the car and the outside rear tyre. McKenzie started in fifth and finished in fifth in the fastest heat race of the night. McKenzie was fourth quickest in the line-up and felt the car cross weight adjustment earlier had affected the handling of the car in the third heat race as the car struggled to turn.

With the Bairnsdale 500 final on the line McKenzie made some adjustments for the final to the inside of the car and the outside rear tyre. McKenzie slotted into a third on the grid start position with Wilson and Hurley ahead of him and Curran alongside with Both and Hadden at the back.

McKenzie slotted in behind Curran and ran in fourth spot whilst Wilson led the race until lap six when Wilson broke a gear box and dropped out of the race. Hurley went on to win from Curran with McKenzie in third spot and second quickest on track after Wilson.

“My car just didn’t handle as well as I was looking for through the turns. Well done to Matthew on his win and Troy on his second place and bad luck to Trent Wilson on his gearbox, he would have been difficult for anybody to catch. I really am enjoying the progress we are making and with what we are learning about setting this car up. It is great to know I have speed.” Said McKenzie.

He also shared the following. “I want to really thank Dillon Siely for the help earlier, Mark Noonan also and of course my fiancé, we are doing this together and enjoying racing together and will head out in our Saloon car until it is time to run the Sportsman again.”