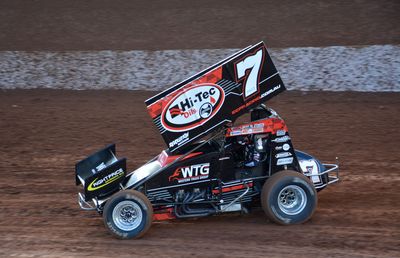 Lachlan McHugh has continued his domination of the 2020/2021 Queensland Sprintcar season, cruising home to win round 10 of the East Coast Logistics Track Championship at Archerfield Speedway on Sunday night (April 18). With his championship nemesis Luke Oldfield unable to make the rescheduled event, McHugh faced little resistance in the 30-lap feature race, leading every lap to clinch his eleventh Archerfield feature win for the season. As they have done throughout the ECL series, Cody Maroske and Callum Walker finished best of the rest in second and third respectively, with Jessie Attard snaring fourth ahead of Adam Butler.

In round nine of the TFH Midget Series, Michael Kendall continued his winning ways with a third consecutive win, leading throughout the 25-lap feature race to finish ahead of Charlie Brown, Matt Jackson, Brock Dean and Darren Vine.

Despite the 24-hour postponement of the show as a result of inclement weather (yet again) in Brisbane on Saturday, a stout field of 27 Sprintcars fronted for action and it was McHugh with a best lap of 11.592 who set the early benchmark in time trial qualifying. Despite the best efforts of Ben Hilder (11.646), Walker (11.705) and Maroske (11.717), McHugh held top spot until a stunning run from Dave Fanning saw him stop the clock at 11.499 to secure KRE Quick Time. Unfortunately for Fanning, his joy was somewhat tempered by the fact that a wheel-stand after the chequer went awry and sent him hard into the infield tyre marker in turn one. Brent Kratzmann, Butler, Tim Farrell, Aaron Kelly and Attard rounded out the top ten.

Following a futile first attempt to start heat one courtesy of a spin from Andrew Corbet in turn one, the ensuing restart saw Allan Woods launch from the outside to lead the field away. Pole sitter Andrew Baumber slotted into second spot and that is how they remained at the finish, with Randy Morgan finishing third.

Kevin Titman also prevailed from the outside front row in heat two, leading all the way as McHugh surged from row four to snare second ahead of Maroske.

Starting fourth, Attard wasted little time in rounding up the front-row starting Nicholas Whell and Sam Bylsma to take control of heat three. Attard would hold sway out front for the duration, with Whell and Walker filling the minor placings.

Back on track for heat four, Attard could not be contained as he charged from the third row on this occasion to clinch another win. Whell was second best again, with Kratzmann clinching third as McHugh suffered a momentary setback when contact with an infield marker in turn four inflicted enough damage to render him a spectator, although the incident ultimately proved inconsequential as the night unfolded.

Corbet claimed heat five ahead of Kevin Britten and Morgan before Darren Jensen wrapped up the preliminaries with a win in the final heat, leading home Kristy Bonsey and Walker.

Although his heat race error saw him slip to sixth overall in points for the night, McHugh had little trouble in reclaiming the positions lost when he won both the bronze and silver rounds of the Pole Shootout before also taking the gold showdown to secure the prime position on the feature race grid. Maroske finished second quickest to secure a place alongside McHugh on the front row, with Attard and Walker next best ahead of Fanning, Kratzmann, Butler and Farrell.

As far as B Mains go, this was a very tame incarnation from which Woods would emerge victorious over Mark Pholi and Whell, with a late surge from Anthony Lambert propelling him into the final transfer position after advancing from row five, leaving Ayers, Corbet and the rest to miss the cut, although Bonsey would opt for a provisional to also join the feature race field.

At the drop of the green to get the feature race underway, McHugh outsprinted Maroske into turn one and that is, in a nutshell, the story of the race as McHugh cleared away from the field, only brought back to the pack by restarts and delays in lapped traffic. Walker was quickly into third ahead of Attard, Kratzmann and Fanning, who would fall away as the race progressed. The first interruption came on lap eight when Woods nosed into the turn three wall to become the only retiree. There were few changes in the order upon resumption of racing, with McHugh still comfortably clear of Maroske and Walker when Titman decided to park against the inside wall exiting turn four on lap 13 to bring about a second, and final, restart. Back underway and Attard discovered that the highline was the fastest way forward, charging around the outside of Walker and closing in on Maroske before opting to rejoin the procession on the bottom of the track, soon to find himself shuffled back to fourth again, which is where he would remain as McHugh raced home ahead of Maroske and Walker. Behind Attard came Butler, who slipped under the radar to record his best result of the season, with Kratzmann and Farrell next in line. Aaron Kelly, Randy Morgan and Fanning rounded out the top ten, followed by Jensen, Hilder and Whell, who finished on the podium earlier in the season but struggled to make any impression on this occasion, leaving Titman, Lambert, Bonsey and Pholi to complete the finishers.

The opening Midget heat was halted after a lap of racing when Nick McDowell climbed the wall in the main straight, ricocheted off the catch fencing and somersaulted over the start/finish flag stand before crashing back to earth. Once underway again, Kody Stothard held the early advantage before Cal Whatmore pounced to procure the lead on lap four. A late charge from Matt Jackson would see him advance into second spot, with Nathan Mathers home third.

Brad Dawson led all of heat two except when it mattered most, surrendering the position to Charlie Brown on the final lap. Sitting fifth with two laps to run, a late surge from Kendall saw him also relegate Dawson on the final lap to secure a runner-up result, while Rusty Whittaker again found himself watching from the infield after suffering yet another mechanical failure.

Despite starting from the fourth row, Kendall was unstoppable in heat three as he surged to the front. The lead changed with four laps to run when Kendall rounded up Whatmore, who would remain second at the flag ahead of Chris Singleton.

The final heat saw Brown collect his second win of the night, although it somehow wasn’t enough to secure pole position for the feature. Brock Dean and Mathers filled the minor placings, the latter surviving an altercation with Lachlan Paulger in turn three on lap eight.

The feature race played out very much like the Sprintcar main with Kendall launching from pole position to lead Brown through the opening moments. The top two spots never changed throughout as Kendall cleared away for his third consecutive win in TFH series competition. Brown also enjoyed a largely unchallenged run in finishing second, seeing off the initial threat from Dean and Whatmore, who would spin and retire infield soon after conceding fourth to Jackson. When Gavin McDowell spun to a halt in turn three with 11 laps remaining, Jackson had advanced to third, holding that position to the chequer. Having started on the outside of the sixth row, Whittaker was the big mover in the field and had surged into the top six but would, for the umpteenth time this season, fail to go the distance, exiting on lap 13. A late-race pass on Dean elevated series leader Darren Vine into fourth spot, with Mathers snaring sixth in advance of Singleton, Dawson and Mitchell Rooke, who was on track for a much better result before a spin on lap eight saw him banished to the back. Scott Jeynes, Kody Stothard and Jesse Harris rounded out the finishers, with Gavin McDowell joining Wnatmore and Whittaker on the grass.

Following heat wins to Brody Thomsen, Robert Mazzer, Liam Atkinson and Seiton Young, the close contest that is so typical of a Wingless Sprint feature race failed to materialise as Thomsen led from the outset to win the 20-lap encounter. Atkinson chased in second spot but was never within striking distance of the lead, with Lachlan Robertson similarly secure in third. Mazzer and Young were next best ahead of Kevin Willis and a somewhat subdued Cody O’Connell, with Allan Woods (on double duty), Michael Butcher and Paul Robinson rounding out the top ten.

Formula 500s served up one of their most exciting feature races of the season with Ryan Newton leading the field through the opening laps before heading infield on lap five, handing the top spot to fellow Junior graduate Boyd Chaffey, who maintained a margin over the pursuing pair of Ryan Skennar and James Kennedy. When Skennar and Kennedy tangled in turn three with just five laps to run, Kennedy found himself stranded and a restart was required, bringing Chaffey back to the field with Kennedy now situated at the back of the bus. Liam Williams pounced to snatch second from Skennar, with Chaffey still leading the way until, in a cruel blow for the youngster, contact between he and Williams resulted in him crashing out. With Williams also unable to continue, it was Skennar, in his first show back after a lengthy hiatus, who inherited the lead and raced to the chequer to win ahead of Kurt Wilson. Rounding up half a dozen cars in just a handful of laps, Kennedy salvaged third ahead of Brady Argles and Jared Boys, leaving Tony Bailey, Libby Ellis, Adrian Farrell and Royce Harvey as the only other finishers.

Heat wins were shared between Argles, Newton and Ryan Davis, who unfortunately failed to make the finish in the feature race. Strong results in both of his heats was enough for Newton to secure pole position for the feature, with three teenagers occupying spots on the front two rows of the grid.

Tim Jackson, Terry Leerentveld, Dan Lewis and Tyson Snow shared the spoils in the Modlite heats with a win apiece and it was largely expected that Leerentveld would dominate the feature race from pole position. That is how things played out for much of the 20-lap duration until a moment in turn four on lap 17 allowed Lewis to pounce and snatch the lead. In a very close result with less than half a second separating them at the finish, Lewis held on to grab the win over Leerentveld, will a wheel-hiking Will Butler home in third spot. Callum Beerling, Snow, Luke Harrison and Andrew Carrick were next best, with Howie Powers and Donika Gower the only others to go the distance. Of those who failed to make the finish, Ben Walker and Chris Fing made the most spectacular exit when contact between the pair resulted in both cars getting upside down in turn three. Other casualties included Jackson, Alex Coward, Nic Stein and Steve Collins.

The next meeting at Archerfield Speedway is on Saturday, May 8 featuring Monster Trucks, Fireworks and round 11 of the East Coast Logistics Sprintcar Track Championship, plus the Queensland Formula 500 Championship, AMCA Nationals, Lightning Sprints and Formula 500 Juniors.