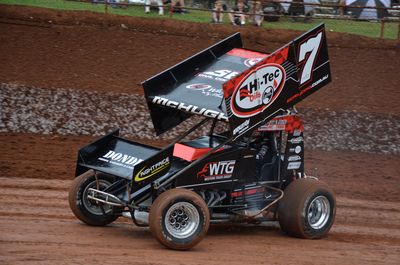 Continuing his domination of Sprintcar results at Archerfield Speedway this season, Lachlan McHugh claimed his tenth feature race win on Saturday night (February 27), racing to victory in round nine of the East Coast Logistics Track Championship. Although certainly not his most emphatic performance of the season, McHugh took maximum advantage of his front row start on a rain-affected night, leading throughout the 30-lap showdown to finish ahead of Cody Maroske and Luke Oldfield, who dished up a dazzling display in his surge to third after starting 14th. Darren Jensen turned back the clock with his run into fourth place ahead of Tim Farrell, who started on pole position and looked on track for a podium result through the first half of the race.

In Sprintcar time trial qualifying, it was Jackson Delamont who best handled the heavy conditions to emerge with KRE Fast Time, stopping the clock at 12.127. Farrell was next fastest with a best effort of 12.152, followed by Mitchell Gee (12.155), McHugh (12.233) and Jensen (12.292). With Ben Hilder, Maroske, Dan Murray, Nicholas Whell and Mark Pholi rounding out the top ten, regular front runners such as Oldfield (18th), Jock Goodyer (19th), Callum Walker (16th) and Aaron Kelly (22nd) were languishing down the order with a lot of work to do.

With very light rain having fallen throughout the first dozen events, the track remained very tacky and super fast for the first round of Sprintcar heats, resulting in a distinct dearth of opportunities for competitors to move forward, which didn’t actually matter much for those who had time trialled well.

It was Anthony Lambert who pounced from the outside row in heat two to lead away and remain out front to the chequer, downing Brendon Claridge and Andrew Baumber.

More of the same in heat three with Allan Woods leading all the way from the outside front row to down Aaron Kelly and Chris McInerney. After a strong start to the night, Gee made a spectacular exit when he rode out a wild wreck through turn three on the opening lap.

Pole starter Mitch Gowland broke the pattern in heat four when he put in a very good drive under pressure to win in advance of Randy Morgan and Brent Kratzmann.

Having failed to take advantage of his pole position start in his opening heat, Kelly (like so many before him) found the outside front row much more to his liking in heat five to lead home Woods and Baumber.

Oldfield was unstoppable in the final heat, running at such a lick that he finished more than 11 seconds clear of McHugh, who looked in danger of going a lap down when the chequer arrived. Given the pace at the front, Quinlan performed particularly well to finish less than 2.5 seconds behind Oldfield, with Goodyer grabbing third.

The first attempt to run the second heat was delayed when a crash from Zac Howell halted proceedings and left the track exposed to the drizzly conditions. Once the rain eased and the track surface had been manicured back into shape, the cars returned and it was Chandler who led throughout from the front row, leaving Wes Jenkins and Libby Ellis to settle for the minor placings.

The Petzyo C Main proved an effortless stroll for Chandler as he left the field in his wake to win by more than four seconds. Jason King and Zac Howell were next best, with Libby Ellis securing the final transfer position into the B Main. Using the outside line to very good effect, Jenkins looked as though he would move ahead of Howell and into the top three until he found himself squeezed for room exiting turn two and was pitched into a wild wreck along the back straight.

In what would be his third such result this season, Randy Morgan outgunned the field to win the B Main, fending off a fast-finishing Allan Woods, with Brendon Claridge and Anthony Lambert securing the remaining transfers into the feature race. Adam Butler had started strongly from further back on the grid, only for a flat tyre to end his charge on lap three, while the subsequent restart resulted in a melee in turn two that left Baumber, Taylor Prosser and 16-year-old rookie Jy Corbet on the infield.

With the Dash scrapped, the field gridded for the 30-lap East Coast Logistics feature race in accordance with their combined time trial/heat race points and that resulted in Farrell landing on pole position, with McHugh alongside. Delamont and Maroske shared row two ahead of Murray and Jensen, with the likes of Goodyer (tenth), Kelly 11th) and Oldfield (14th) with a lot of work to do. Yet again, the outside proved the place to be as McHugh led the field away, only for some congestion in turn one that resulted in Murray tipping over in the path of Kratzmann and Nicholas Whell. Despite a crumpled top wing, Murray would attempt to continue but soon found himself on the infield to join Kratzmann, while a tyre change would enable Whell to resume from the rear. At the restart, Farrell looked to have McHugh beaten into turn one, only to concede the position and then find the race halted again when Chris McInerney spun in turn four. Underway at the next attempt, Farrell again conceded the lead to McHugh, with Farrell, Maroske and Delamont next in line. Oldfield was instantly on the move back in the pack and had already advanced to eighth when a spin from Hilder brought about another restart on lap three. Goodyer ended his Brisbane campaign in disappointing fashion when he spun in turn four on lap 13 and was collected by Callum Walker, who was on a big charge after taking a provisional to start from the rear of the field. Both cars exited as McHugh led away once more, with Farrell still sitting second at this stage ahead of Maroske, Delamont and Oldfield, who had but on a brilliant display as he fought his way forward to now be situated in a position to challenge the leaders. Farrell soon found himself on a backwards trajectory, slipping to fifth as Maroske assumed the runner-up role and Oldfield surged into the top three. A late surge from Jensen saw him round up Delamont and then finagle fourth from Farrell, while a big run from Morgan carried him to seventh ahead of Kelly, Ayers and Lambert, leaving Whell, Hilder and McInerney as the only other finishers.

AMCA Nationals heat race wins were shared between Matt Ingrey, Bruce Marshall, Tony Blanch and Nathan Tomkins, but it was Steve Potts who would start round six of the Shock Absorber Therapy Track Championship feature race from pole position courtesy of runner-up results in both of his heat race outings. When Marshall spun in front of the field in turn one, the ensuing fracas left Blanch, Michael Denning and Scott Hitchcock on the infield and out of action, to be joined by Ingrey a lap later. Marshall resumed from the rear but succumbed to damage on lap nine as Potts skipped clear to a substantial lead until Thomas Vickery was able to extricate himself from a scrap with Shane McKinnell. The gap narrowed considerably as the laps wound down with Vickery clocking the fastest lap of the race in his pursuit of the lead, however Potts was able to hold firm to clinch his third win for the season. McKinnell remained third at the flag, followed by Troy Price and Tomkins, whose late-race pass denied Dylan Stacey a top-five result. Stephen Ward, Jay Allen, Shane Stacey and Robert Turner rounded out the top ten.

David Eggins was the standout in the Wingless Sprint events, winning both of his heats before also taking out the 20-lap feature race. The fight for the minor placings in the feature was crazy hectic before Paul Robinson eventually emerged in second spot, maintaining his perfect record of top-five results in every feature event at Archerfield so far this season, while Liam Atkinson finished third ahead of Tim Harris, Shaun Knight and Steve Pilkington. Next best were Anthony Joyce, Marun Kusturin and Lachlan Robertson, whose heat win earlier in the night by more than seven seconds was a margin of the likes we rarely see in Wingless Sprint racing. Jayden O’Toole was also a heat winner, but could do no better that 12th in the feature behind Ian Milnes as the final runner on the lead lap.

Compact Speedcar heat winners were Michael Kendall and Dion Wilson, but come feature race time it was Dave Collins who proved too pacey, surviving a late-race surge from Steve Swingler to score a narrow win. Andrew Parkes was third home ahead of Richard Treanor, Mitchell Rooke and Wilson. Running inside the top four before a spin saw him relegated to the rear of the field, Kendall was closing in on the top five before becoming engulfed in a cloud of steam and making a hasty retreat to the infield.

Ben Robertson won both of the Open Sedan A heats and was leading the feature race before spinning infield and eventually rejoining a couple of laps in arrears. Somehow seeming to believe he should be reinstated to the lead at a subsequent restart following a spin from Dave Sansby with three laps to run, Robertson was ordered infield by officials. Brad Trussell would emerge the victor over Sansby, Joel Thomas, Colin Morris and Les Eisenmenger.

Merv Price and Elgan Dalton snared a win apiece in the Open Sedan B heats before Mark Anderson grabbed the one that matters in taking out the feature race, leading home Price, Robert Gorman, Michael Laver and Steffani Manser.

Both heats of Ford vs Holden vs Sigma action went the way of Maverick Dack, with Dave Tookey crossing the line first in the second heat before being excluded by race officials. Dack also looked on track to take the feature until a detached exhaust saw him ordered infield, where he would be joined by Kim Dack, who was also excluded following an incident in turn one on lap five. In the end it was Terry Russell who would prevail, with Zac McDonald and Linkon Allen the only others to go the distance.