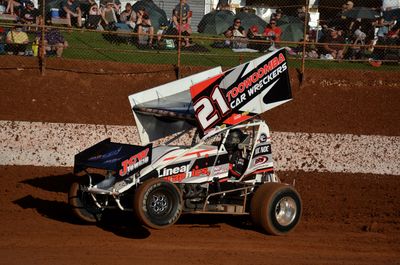 It seems unimaginable that, with more than 40 drivers having taken part in Sprintcar competition at Archerfield Speedway this season, Lachlan McHugh has won six of the seven feature races conducted thus far. In fact, the Gold Coast gun has won every feature race he has finished, starting with the Queensland Championship in October and then following up with victories in four of the first five rounds of the East Coast Logistics Track Championship, the only blip coming in the series opener when he failed to go the distance courtesy of a crash in the opening laps. In fact, the results so far this season have been dominated by a very small selection of competitors with Luke Oldfield, Callum Walker and Cody Maroske proving to be McHugh’s biggest threats each week and on Wednesday night (December 30) they again take on another 30+ competitors in round six of the ECL Championship.

Such has been the dominance from this quartet that they are the only four drivers to have recorded a KRE Fast Time in qualifying so far this season and, between them, they have snared 19 of the 21 podium placings from the seven feature races contested thus far. With the exception of McHugh’s opening round upend, there has not been a setback, circumstance or rival racer that has prevented this foursome from finding their way to the front. Aaron Kelly, Kevin Titman, Mitchell Gee and, more recently, Jock Goodyer, have been close(ish) on occasions and have accumulated eleven top-five finishes between them, yet only two of these have been converted into podium results. Of the rest, Brent Kratzmann and Randy Morgan are the only others to have finished inside the top five, but neither has produced the level of consistency needed to disrupt the status quo. In fact, such is the see-sawing nature of Morgan’s form that he also leads the B Main win tally at the moment, having twice won the last-chance qualifier to secure his place in the feature race field.

None of this is to suggest that the quality of racing has somehow been diminished because that is far from the case and there have certainly been some individual moments from other competitors that have stood out, such as a stirring win in the Dash last Saturday night from Nicholas Whell to secure pole position in the feature. However, like so many before him who have served up something special through the various stages of qualifying, Whell was unable to make it count when it mattered most in the main event. It has been said before, but maybe Wednesday is the night that somebody new will emerge from the pack and stake their claim as a genuine threat to the big four.

As part of a huge double-header program, a stellar field of drivers from across Queensland and interstate will contest round seven of the McCosker Super Sedan Series, including no less than four Australian Championship winners who have amassed 10 national titles between them, with Monster Trucks, AMCA Nationals, Compact Speedcars, Stockcars and fireworks to also feature as part of another massive night of motorsport entertainment.

Unlike their Sprintcar brethren, wins in the Super Sedan ranks this season have been shared around with four drivers having thus far prevailed in a round of the McCosker Series. National championship winners Michael Nicola, Matt Pascoe and Darren Kane have all visited victory lane, while Toowoomba racer Sean Black currently leads the way with three feature race successes to sit atop the series standings. Both Pascoe and Kane arrive at Archerfield having secured wins earlier this week on consecutive nights in Bundaberg and Gympie respectively, while it was Nicola who triumphed when Super Sedans last appeared at Archerfield in November. Black, meanwhile, collected wins in Toowoomba, Kingaroy and Maryborough and would love to replicate those results on the big stage against what will be the toughest field to assemble so far this season.

Results in recent weeks have confirmed the emergence of several drivers as genuine contenders, with the likes of Sam Roza, Nicholas O’Keefe and rookie Zac Pascoe upstaging the old guard to race their way onto the podium. Others bringing good form in to Wednesday night include former national champ Steve Jordan, Lismore’s Tania Smith and another rookie making rapid progress in Hayden Brims, while the inclusion of Michael Nicola Jnr in the field adds a very serious candidate into an already potent mix of potential winners.

Perhaps the closest competition so far this season has come courtesy of the AMCA Nationals and whilst results so far this season suggest the likes of Bruce Marshall, Lee McKinnell, Steve Price and Nathan Tomkins are likely front runners, the inclusion of several competitors from New South Wales and the Northern Territory in the field puts additional pressure on the locals to ensure the interstate invaders leave empty-handed.

Chasing his third Compact Speedcar feature race win in a row, Kiwi ace Michael Kendall is probably expecting his toughest competition to come in the form of a couple of youngsters in Bodie Smith and Harry Stewart, however it might just be the return of Steve Swingler that proves the biggest challenge for the four-time New Zealand Midget champion.

Gates open at 1.00pm for competitors and online ticket holders only, with general admission ticket sales and entry from 3.00pm. Grandstand and bleacher seating is for reserved ticketholders only and tickets for these areas must be purchased online.
Early racing will hit the track from 5.00pm and the main program, which will also feature the crash and bash Stockcars, fireworks and several appearances from the might Monster Trucks, will get underway from 6.00pm.