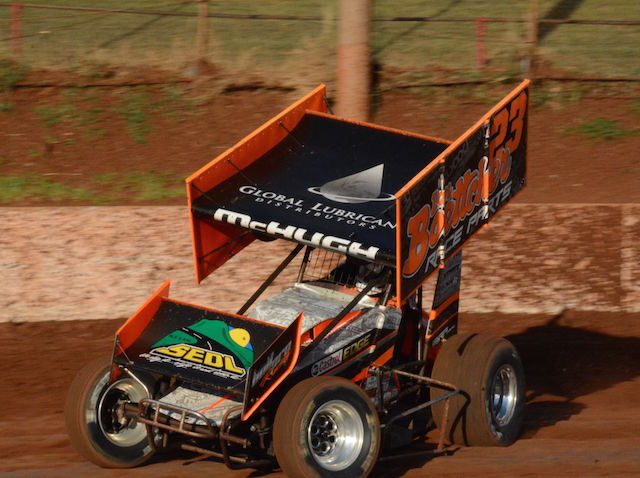 McHugh qualified his Ian Boettcher Race Parts #23 Cool on pole position for the 20-lapper and spent the duration fending off the advances of American ace Carson Macedo before securing his first WSS win.

On a night that proved a total contrast to the previous round just two nights earlier, there were no major incidents in the heats or preliminary mains, with all drivers obviously conscious of the need to back up again on Saturday for the final night of racing.

As always, qualifying proved critical and it was Madsen (11.526) who topped the time sheets on this occasion ahead of Veal and Tatnell.

Mitchell Gee, McFadden and McHugh were next quickest ahead of Brent Kratzmann, Lucas Wolfe, Luke Oldfield and Bryan Mann, with Schatz, Dave Murcott, Jensen and Macedo also dipping below 12 seconds in their runs against the clock.

Tasmania’s Callum Zizek looked to have heat two in his keeping until he spun himself out of the lead, handing the win to Brayden Willmington over Jensen and Allan Woods.

It was a 1-2 result for the internationals in heat three when Macedo motored home ahead of Schatz, with Dylan Menz securing third in advance of McHugh.

Woods was too swift in heat four, downing Scheuerle and Jensen, while heat five went to Harding over Murcott and Liebke.

As one of the few drivers who seemed determined not to let their time trial results dictate their feature race starting position, McHugh moved forward to finish fourth once again, a result that would subsequently see him leapfrog the likes of Madsen, McFadden, Veal and Tatnell to secure pole position in the preliminary feature.

Also not content to languish mid-pack, Macedo doubled up with another win in the final heat, downing Oldfield and Menz in a result that would elevate the Californian from 14th after time trials to the outside front row for the main event.

Some heavy hitters featured amongst the starters in the Preliminary B Main and it was Scheuerle, Gee, Kratzmann and Bryan Mann who filled the top four spots to secure a start in the feature event.

After an uncharacteristically lacklustre display in time trials and the heats, Jayden Peacock launched a late charge that elevated him from 16th to seventh behind Jack Lee and Menz, but it was too little too late.

Among those who missed the cut was Logan Schuchart; the Pennsylvanian heading infield on lap eight.

It was Macedo who got the best of the start in the Performance Wholesale Preliminary feature, but McHugh countered immediately to secure the lead.

Other than a few loose moments exiting turn four, McHugh drove splendidly to fend off Macedo and negotiate lapped traffic.

Macedo moved ahead again momentarily following a restart triggered by a tangle between Woods and Luke Oldfield, but McHugh remained composed and immediately reasserted his authority to assume the front running.

The gap fluctuated as they negotiated lapped traffic and it was going to take a mistake or some other misfortune for McHugh to be denied; neither of which transpired.

Madsen, McFadden and Schatz looked very menacing and loom as the drivers to beat in Saturday’s 50-lap finale, while Veal was solid without making too much impression on the leaders.

Jensen finished seventh ahead of Tatnell, Lack and Harding. Lucas Wolfe annexed 11th, followed by Oldfield, Scheuerle and the Wednesday night feature winner in Murcott, with Gee, Kratzmann and Mann completing the finishers.

In only his third meeting in the senior ranks, Aaron Kelly outgunned a depleted field to win the Lightning Sprint feature race.