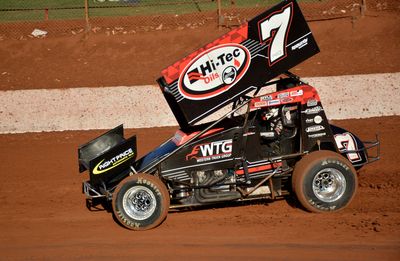 Despite a pole position start, Luke Oldfield again found himself sitting in second position behind Lachlan McHugh when the chequer fell to conclude round three of the East Coast Logistics Sprintcar Track Championship at Archerfield Speedway on Saturday night (November 28), the fourth such time that Oldfield has filled the runner-up position since racing resumed in October. In fact, Oldfield is the only driver to finish on the podium in every Sprintcar feature race at Archerfield so far this season, but once again he couldn’t match the pace of McHugh, who launched from the outside front row to lead all 30 laps to secure his sixth success from eight starts for the season. Securing a place on the podium for the second round in succession, Callum Walker brought the Mobil #33 home in third spot, with both Aaron Kelly and Kevin Titman advancing their positions to finish fourth and fifth respectively.

Hitting the track early as part of the first group to race the clock in Time Trials, Cody Maroske stopped the clock at 11.565 and then waited as another 28 drivers, many of whom had access to better track conditions, were unsuccessful in their efforts to usurp him from the top of the timesheets. McHugh (11.569) was second quickest by the merest of margins, with Dylan Menz (11.660) and Oldfield (11.798) next best. Kelly, Mitchell Gee and Dan Murray were the only others to go under 12 seconds, with Brent Kratzmann and Adam Butler completing the top ten qualifiers. Tim Farrell, meanwhile, never had the opportunity to register a time before he found himself upside down in turn two and out of action for the night.

Gee and Darren Jensen were the next to make an early exit when contact between the pair pitched Jensen into a series of somersaults along the top of the turn one wall from which he miraculously emerged unscathed, only to be faced with a significant repair to get the KRE #75 back on track. Allan Woods would assume control of the race from the outset and lead all the way to the flag, with Maroske taking advantage of the depleted field to clinch second ahead Randy Morgan.

Kevin Titman cleaned up in heat two, leading all the way to defeat Oldfield and McHugh, both of whom advanced from the fourth row.

Andrew Corbet led the opening three laps of heat three before Brad Ayers moved to the front through turn two on lap four. Determined to regain his lead, Corbet charged back underneath Ayers in a move that never looked likely to succeed, ultimately resulting in both cars spearing into the turn three wall. Whilst Corbet would return, Ayers was done for the night, a fate that also befell Kratzmann when he tipped over after climbing the wall exiting turn two. Through it all, Brendon Claridge held firm to grab a win over Daniel Cassidy and Walker.

Having endured a very frustrating start to the season, Nathan McFarlane found something to smile about when he downed Kevin Britten and Cassidy to win the final heat of the night.

Starting from the outside front row in the Dash, Oldfield skipped clear of the field and maintained his advantage to lock up pole position for the main event. McHugh, who topped qualifying before selecting position four in the pre-race inversion draw, disposed of Maroske and the pole-starting Walker to finish second. Rounding out the field were Menz, Butler, Kelly and Cassidy, who was very impressive in his Archerfield debut.

Morgan was untroubled in leading throughout to win the B Main, with Woods likewise facing little resistance in his run into second spot. It was a much closer scrap for the final transfer spots though with a last lap pass from Lachlan Caunt moving him into third ahead of Britten.

The outside front row starting slot proved critical for McHugh at the commencement of the feature race, enabling him to move ahead of Oldfield who, as expected, promptly moved up-track to chase McHugh around the top. With Walker extracting plenty of pace from the bottom, Oldfield soon found himself under attack, enabling McHugh to skip clear. After spinning in turn four on lap five, Baumber spent a couple of laps rolling around the infield before deciding to stop on the edge of the track in turn one to force what would be the only restart of the race. Needless to say he was subsequently denied any further participation in the event. Back underway and McHugh maintained his advantage over Oldfield who, a couple of laps later, made a momentary switch to the bottom of the track, only to find himself relegated by Walker. Quickly retreating back to the cushion, Oldfield had regained second spot by lap 16 but was unable to make much impression on McHugh. The gap between the pair certainly narrowed in the closing stages but McHugh was untroubled in securing his fourth Archerfield feature win for the season. Behind Oldfield and Walker came Kelly, who advanced from the fourth row, with Titman, Menz and a backsliding Maroske next in line. Morgan and Woods were the biggest movers through the field though with both B Main transferees climbing into the top ten ahead of Fanning, who would be the last driver to finish on the lead lap. Caunt, Butler, Britten, Murray, Bonsey and Paul Rooks completed the finishers, with Cassidy heading infield on lap 20.

Brant Chandler won both heats of the Petzyo Development Sprintcars, but come feature race time it was a jubilant Libby Ellis who prevailed, with a late surge from Jason King carrying him into second spot ahead of Chandler, Zac Howell and John White.

Dirt Modified heat race wins were shared between Geoff Phillips, Mark Robinson and Kevin Britten, who endured a busy night across two categories. With Phillips a scratching from the feature, just 11 cars faced the starter and it was Robinson who assumed the early lead. However, in Dirt Modified action the fastest way home is often against the fence and that is how things transpired once again as David Clark rounded up Robinson to take control of the race. When Robinson gave up the chase and headed infield a few laps later, Britten moved into second spot as Andrew Pezzutti found himself under pressure for third. Ultimately, it would be Chris Corbett who secured the final place on the podium as Pezzutti slipped to fifth behind Andrew Firth. Next best were Zac McDonald and Darren Tindal, leaving Phil Roberts and Marcus McKenzie as the only other finishers.

In a preview of what was to come later in the night, Steve Potts won the opening AMCA Nationals heat in advance of Steve Price and Michael Denning.

Round one winner Bruce Marshall was untroubled from the front in winning heat two from Nathan Tomkins and Raymond Kime, with Marshall back on track for heat three in which he finished second behind Price, with Scott Hitchcock third on this occasion.

The final heat went to Russ Hardy over Kime and Graeme Holland, while a fourth-place finish from Potts was enough to put him on the front of the feature race grid alongside Marshall.

Marshall got the best of the start in the 20-lap Shock Absorber Therapy feature race but, obviously having paid no heed to how the Dirt Modified feature race played out immediately beforehand, he clung to the pole line, leaving himself vulnerable to anybody who was prepared to run a wider line. Potts accepted the invitation and rounded up Marshall on lap 10. Price followed suit on lap 15 and less than a second would separate the pair at the finish as Potts secured his second win in as many rounds. Marshall would ultimately succumb to a flat tyre, elevating Raymond Kime into third spot behind Price and ahead of Michael Denning and Nathan Tomkins, with Robert Kynaston, Troy Price, Hardy, Brett Robotham and Shane Stacey rounding out the top ten.

An abundance of late additions to the field boosted the numbers for the Formula 500 events and, as a result, the heats were perhaps the hardest fought we have seen so far this season. Liam Williams prevailed in the opening heat ahead of Kurt Wilson and James Kennedy, with Bryn Upshall downing Kennedy and Ryan Newton in heat two. Whilst the final heat went to Brady Argles, it would be the second and third placed pairing of Williams and Kennedy who, in the absence of an inversion of any kind, would share the front row for the Touch Ups Done Right feature race.

Williams got the best of the start and set forth on what looked as though it would be a reasonably comfortable win, only for a spin from third-placed Wilson to bring about a restart with just two laps to run. Kennedy pounced upon the resumption of racing, rounding up Williams to assume the lead heading into the final lap, the pair making contact as they swept under the white flag. Williams was able to sneak ahead again through the final lap to score back-to-back feature race wins, with Kennedy gallant in defeat. A frantic finish further back resulted in Upshall securing third place ahead of Brock Thornton, Brady Argles, Hayden Pascoe and Adrian Farrell, with Wilson, Newton and Tony Bailey completing the top ten.

Compact Speedcar heat wins were shared between Connor McCullough, Harry Stewart and Richard Treanor, but come feature race time there was no stopping Michael Kendall as he cleared away for his third win on the trot. Having finished second in both of his heats to top qualifying, Kendall would start from the outside of row two courtesy of a four-car inversion, but this proved to be of little consequence as he swept past Andrew Rooke on lap two to assume the lead. A late-race pass from Stewart would propel him into second spot ahead of Rooke, with McCullough and Dion Wilson the next best.

Not for the first time this season, Super Sedan-mounted Ben Robertson looked to have the Open Sedan A feature safely in his keeping, only to find himself unable to cope with slickening conditions, spinning out of the lead with three laps remaining to hand Justin Randall another win aboard his trusty Torana. The Late Model of Robin Bains finished second ahead of Gary Kivela, Les Eisenmenger and the chastened Robertson.

Ben Harris won all three heats of Open Sedan B racing before also cleaning up in the feature race, leading Dylan Craft, Ricky Price, Brad Hill and Aaron Wells to the line.