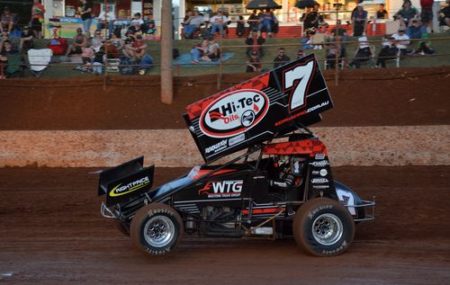 The 2019/2020 Queensland Sprintcar Championship has finally been decided, with Lachlan McHugh joining some illustrious company in successfully defending his state crown in a thrilling 35-lap feature race at Archerfield Speedway on Sunday night (October 4). Launching from pole position, McHugh led every lap of the feature race but found himself under intense pressure from Luke Oldfield who, after languishing for too long on the bottom of the track, shifted back to his comfort zone against the fence and chased down McHugh to set up a thrilling finish. Whilst Kevin Titman occupied second spot for a lengthy period mid-race, there was a sense of inevitably about the way things were meant to be and, while there was nothing he could do to counter the pace that the leading pair possessed, he certainly emerged as the best of the rest with a third-place finish. Randy Morgan and Callum Walker completed the top five ahead of Adam Butler, who started on the second row and fell back as far as tenth at one stage before rebounding back to sixth at the flag, followed by Mark Pholi, Cody Maroske, Dan Murray and Tim Farrell.

From the opening salvos on Saturday night, through to the last few metres of the championship final on Sunday evening, the weekend was always a battle in two as the rest of the field found themselves fighting for the remaining place on the podium. Oldfield ended the opening night just a solitary point ahead of McHugh, who won the preliminary feature race, and this advantage remained static until McHugh triumphed in his final heat race to secure provisional pole position.

As he did the previous night, Randy Morgan took out the opening heat race, leading home Oldfield and Paul Rooks.

McHugh was back on track in heat eleven and, when he chased down Claridge to clinch a win, he moved ahead of Oldfield in the standings, with Farrell third home once again
.
Kevin Britten chased down Aaron Kelly to win the final heat of the weekend, while a third-place finish from Kratzmann was enough to propel him into third overall in points.

At the completion of qualifying, McHugh was two points ahead of Oldfield, with Kratzmann 10 points further back ahead of Cody Maroske, Mitchell Gee, Titman, Adam Butler and Allan Woods, although this order would change somewhat as a result of the Pole Shootout.

The opening round of the shootout saw Butler and Titman outpace Gee and Woods and advance to take on Kratzmann and Maroske, although the latter would take no part as the team grappled with an engine change. Butler and Titman would advance again but were unable to match the pace of McHugh and Oldfield, who locked up the front row of the feature race grid.

The B Main was an absolute corker, with the battle for the final transfer positions into the feature not decided until the last possible moment. Confined to the last-chance qualifier after a crash in his final heat, Corbet was never threatened at the front of the field, with Mark Pholi equally comfortable in securing second spot. As the laps wound down though, third-placed Andrew Baumber found himself under increasing pressure from Brock Dean, now possessing the pace he had been desperately lacking all weekend, riding the cushion and closing in. Having started last after missing the opening night of competition, Dan Murray was also on a charge and would miraculously find himself in the feature race when he guessed best in negotiating the lapped car of Zac Howell in the final turn and slipped ahead of Dean as they raced under the chequer.

The SRV Road Freight Services Queensland Sprintcar Championship feature race only made it as far as turn one before Britten rode the wall and crashed out, bringing a complete restart to proceedings and affording Oldfield a second opportunity to upstage McHugh from the outside front row. It was not to be however and McHugh led the opening circulation as Oldfield found himself under pressure from Titman, who would advance to second on lap two, only for the race to be halted when Claridge tipped over in turn four. McHugh led away again from Titman and Oldfield, with Maroske having moved ahead of Kratzmann and Butler. The next interruption came on lap 16 when Woods whacked the wall in the main straight and, whilst there were no changes at the front of the field, things were happening further back as the likes of Morgan and Walker started to move forward. Having wasted too much time running low on the track, Oldfield switched back to the highline and soon had Titman in his sights. On two occasions, Oldfield moved ahead of Titman, only to have the race halted each time when Kelly and then Kratzmann crashed out in similar circumstances though turn four. Once safely ensconced back in second spot, Oldfield bid farewell to Titman and set off after McHugh, riding the cushion to great effect as he chased down the leader. However, showing his hand a little too early, Oldfield charged around McHugh through turn two with three laps to run and, not only did he fail to stick the pass, he alerted McHugh to his intentions and would never get another opportunity as McHugh shifted up-track for the remaining laps to retain his state championship crown and join Robbie Farr and track promoter John Kelly as the only drivers to have won consecutive stagings of the this event. It was a typically ballsy run from Oldfield into second spot, with Titman holding third to the flag. A spin from Maroske with five laps remaining elevated Morgan to fourth ahead of Walker, with Butler securing sixth ahead of Pholi, Maroske, Murray and Farrell. Fanning, Whell, Corbet and Baumber were the remaining finishers, with a flat tyre forcing Gee to the infield on lap 15.

For the second night in a row, there were some strange goings-on within the Midget ranks as several cars struck trouble to leave the field severely depleted come feature race time.

One of those to make an early exit was Tom Clauss, riding out a wild ride through turn three in the opening heat to leave a field of just four cars to complete the distance. Ricky Robinson would take the race in advance of Rusty Whittaker and Lachlan Paulger, who proved a revelation as the night progressed.

Having set fast time in qualifying, Darren Vine proved too quick in heat two, leading Nathan Mathers and Chris Singleton to the flag.

Scott Doyle downed Whittaker and Robinson to win heat three before Paulger put on a mighty drive in the final heat to round up the field, score his maiden win and secure a front row start for the feature race. Brad Dawson and Brodie Tulloch filled the minor placings.

Just nine cars survived to contest the TFH Hire Services Feature Race and Rusty Whittaker proved unstoppable from pole position, leading throughout to win the 25-lapper. Lacking the pace to challenge the leader, Paulger drove faultlessly nevertheless and fended off the advances of the vastly more experienced Darren Vine and the opening night feature winner in Dawson to secure second spot in a career-best result. Robinson finished fifth ahead of Mathers and Darren Dillon, leaving Tulloch and Cal Whatmore as the remaining finishers.

Although the Lightning Sprint heat wins were shared between Tyler Stralow, Dave Collins and Darren Baldwin, it was the consistency of Kirsty Kelly that saw her secure pole position for the feature. Having distanced herself from the field, Kelly looked to have the race in her keeping until an engine fire sent her slewing to the infield and scrambling out of the cockpit. Michael Gollagher would inherit the lead and remain in that position to the chequer, leading home Dave Collins, Darren Baldwin, Andrew Kimm and Jim Kennedy.

John Lawson won the opening Microsprint heat before Jason Glynn prevailed in the remaining two and also went on to win the feature race. Shane Munro recovered to finish second after spinning from that position on lap 9, with Chris Tunnah, Eddie Schwehla and Cameron Munro rounding out the top five.

Wayne Kirkman prevailed in the RSA Outlaw Sedans feature race in advance of Dave Sansby, Michael Taylor and Daniel Taylor, while it was Matthew Hannigan who bested the Limited Sedans, downing Aaron Buchanan and Michael Laver.