McHugh closing in on championship

McHugh closing in on championship 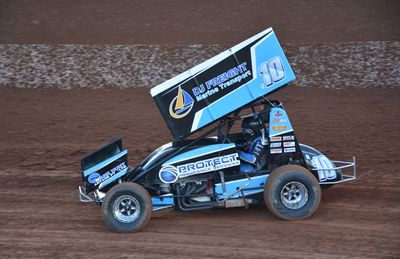 With eleven rounds down and three to go, Lachlan McHugh is on the cusp of securing his first East Coast Logistics Sprintcar Track Championship in what has been an unprecedented season of success for the Gold Coast-based racer. This Saturday night (May 22), McHugh will be seeking his 12th feature race win for the season at Archerfield Speedway, having taken out the Queensland Championship at the beginning of the season and two rounds of the Super Seven Series in addition to seven rounds of the ECL Track Championship. Also on the program on Saturday night will be the latest round of the Petzyo Sprintcar Development Series, along with Queensland Championship events for Lightning Sprints and Microsprints, plus Formula 500s and Stockcars.

Of the 65+ Sprintcar drivers who have competed at Archerfield so far this season, Callum Walker is the only one who has been able to upstage McHugh more than once, including the most recent round earlier this month. On that occasion, Walker was impeccable at the front of the field and McHugh had to settle for a runner-up result. With nobody else having emerged as a threat with any consistency, McHugh has been able to dominate the championship and establish a significant lead in the series standings. Needless to say, Walker occupies second spot on the points table, with defending track champ Aaron Kelly sitting third overall at the moment through the sheer weight of his consistent points accumulation at each round. So, can McHugh be tamed again this weekend? Will Walker stand tall once more or will it be Kelly who breaks through for a win? Will somebody else emerge from the pack to join Cody Maroske and Jock Goodyer as the only others to secure a feature race win this season?

Of those nominated for this weekend, Kevin Titman, Ryan McNamara and Nicholas Whell are the only others to have featured on the podium, but neither of them have been able to do so on more than one occasion and, while this makes it difficult to imagine how any change to the status quo might play out, there is still a swag of drivers who will be desperate to secure a meaningful result before the season concludes. However, any locals hoping to secure their moment in the spotlight will face the additional challenge of having to upstage two-time Australian champion Dave Murcott. Having been a late withdrawal from his last scheduled appearance, Murcott is nominated again this weekend and certainly has the credentials to carry him into victory lane, while a very late start to the season from Bryan Mann is another obstacle the likes of Darren Jensen, Brent Kratzmann, Tim Farrell, Jessie Attard, Dave Fanning and Adam Butler must overcome in their bid to secure a place on the podium that has looked within their grasp at various times but has thus far failed to materialise.

Whilst former Wingless Sprint competitors have been the standout performers so far in the Petzyo Development Sprintcars, the series has lured new drivers into the fold from a wide variety of other race categories, with former Solo motorcycle racer Craig Hyde the latest addition, making his second appearance as part of an 11-car field on Saturday night.

Of the 15 entries to contest the Queensland Lightning Sprint Championship, five of them have secured feature race victories at Archerfield this season, perhaps making this a much tougher result to predict. Tyler Stralow is certainly the best performed of the bunch in Brisbane this season with three feature race wins, but the timely return to form of defending champ Jason Rae at their last outing here suggests he will offer significant resistance to anybody intending to take the title from him. Michael Gollagher, Darren Baldwin and Keith Blatch have also visited victory lane this season and, while former two-time national champ Kurt Wilson has only made two appearances this season, he finished on the podium in both instances and is obviously a significant threat, although he will have to successfully negotiate the logistics of also competing in Formula 500 events on the night.

After making very easy work of a small field in Maryborough last Saturday, newly crowned Queensland Formula 500 champion James Kennedy faces a much tougher assignment this weekend when he returns to the scene of his state title success to contest the final round of the Done Right Paint Worx Formula 500 Series. Kennedy will resume hostilities with four-time national champ Liam Williams, who looked to have the state title in his keeping until Kennedy pounced on the final lap for a memorable win. Cairns young gun Brodie Davis will be looking to secure a result that delivers on the promise he has shown during his extended southern sojourn, while a trio of fellow Junior graduates in Jarred Boys, Kacy Lee Black and Taylor Morgan have also performed with distinction in recent outings and shown little regard for the reputations of their more experienced rivals.

Having successfully defended his Australian Championship crown just two weeks ago in Toowoomba on the back of several rivals succumbing to the pressure of the occasion in the closing laps, Shane Munro will be hoping that it will be superior speed, rather than good fortune, that carries him to victory in the Queensland Championship feature race. Jacob Lynd and Eddie Schwehla were amongst those who faltered in Toowoomba and are no doubt looking to make amends, while Jason Glynn, John Lawson and BenLe Pla are also likely to be somewhere in the mix.

Gates open at 2.00pm for competitors and online ticket holders only, with general admission ticket sales and entry from 3.00pm. Early racing will hit the track from 5.00pm and the main program, which will also feature the crash and bash Stockcars, will get underway from 5.45pm. There is no reserved seating for this event, however all patrons must maintain 1.5m social distancing.