McHugh chasing five in a row

McHugh chasing five in a row 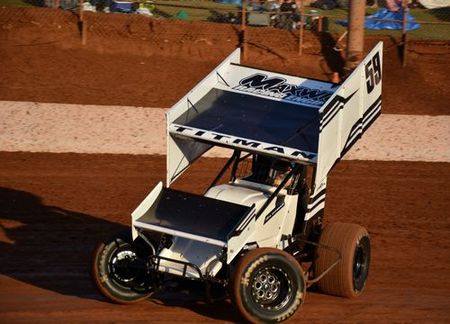 There are 31 drivers nominated for the opening round of the 2020/2021 Sprintcar Track Championship at Archerfield Speedway this Saturday night (October 17), but if the events of the last three weeks are any indication, 29 of these will be fighting for just one place on the podium. Such has been the supremacy of Lachlan McHugh and Luke Oldfield in the early weeks of the season that they have finished first and second respectively in all four feature races staged thus far, including the Queensland Championship final at Archerfield two weeks ago. Whilst McHugh has prevailed on each occasion to enjoy a perfect record of success since taking over from Robbie Farr as the driver of the East Coast Pipeline #7, Oldfield has been at his spectacular best and, thus far, nobody else has stepped up to announce themself as a threat to the domination this duo have delivered.

With a huge support program that includes round two of the Shock Absorber Therapy AMCA Nationals Track Championship, the opening round of the Touch Ups Done Right Formula 500 Series and round three of the Boss Hogg Steakhouse/SCA Racewear Compact Speedcar Club Championship, along with Modlites, Stockcars, RSA Sedans and Open Sedans, more than 130 competitors will hit the track.

Whilst Lachlan McHugh has seemingly developed an instant rapport with crew chief Nick Speed and is bursting with the confidence that success brings, there is no doubt that, despite a start to the season that is outstanding by any measure, Luke Oldfield will be frustrated at having failed to convert at least one his runner-up results into a win and will be very focussed in his determination to upstage McHugh and find his way back to victory lane. There are certainly a few drivers in the field who possess the pedigree to suggest they could end the McHugh/Oldfield stranglehold, with Kevin Titman having proven the best of the rest in recent outings. Titman finished third in the state title final and was running strongly inside the top five in Toowoomba last weekend before lady luck struck him down. Of the others, Allan Woods, Brent Kratzmann and former Queensland champion Mitchell Gee bring plenty of race-winning experience and are obviously a threat, as are the trio of Randy Morgan, Callum Walker and Adam Butler who finished fourth to sixth in the Queensland Championship feature race, while defending Archerfield track champion Aaron Kelly raced himself back into form at Toowoomba with a top four finish after starting deep in the field.

As is the case each season, the opening weeks of competition welcome new drivers into the ranks and this is the case once again with Brant Chandler, Taylor Prosser, Zac Howell and Nicholas O’Keefe all nominated to make their track championship debut.

Heading into this weekend, four-time national Formula 500 champion Liam Williams finds himself in a very unfamiliar position on the back of two feature race defeats. After finishing second in the Queensland F500 Championship two weeks ago, Williams again found himself relegated to a runner-up finish in Toowoomba last weekend when he couldn’t keep pace with James Kennedy. Both Kennedy and Williams are in the field for the opening round of the Touch Ups Done Right Formula 500 Series, along with Ryan Newton, who has twice finished third behind Williams this season to emerge as a new threat to the established order, which includes series regulars such as Kristin Brown, Brady Argles and Tarhlea Apelt.

Having completely dominated the opening round of the AMCA Nationals Track Championship, Bruce Marshall heads the entry list for round two. Several drivers who would typically be in the thick of the action at the front of the field had no answer to Marshall in the series opener and, of those, Steve Potts, Steve Price, Scott Hitchcock, Troy Price and Michael Denning are amongst the entries again this weekend, while the return of Matt Hardy further strengthens the field.

Whilst Compact Speedcar numbers are down, the category is again proving itself as a fertile breeding ground for new talent, with youngsters Bodie Smith and Harry Stewart having upstaged their more experienced rivals to fill the top two spots in the previous round of the Club Championship. The latest in a long line of young guns who have started their careers in Compact Speedcars, Smith and Stewart will take on another dozen drivers, including old hands in Dave Collins, Glenn Wright and Matt O’Neill.

Modlites, meanwhile, will launch their Archerfield season with a solid field of entries that includes familiar faces such as Klinton Hancey, Terry Leerentveld, Sam Gollschewsky, Dan Lewis, Sean Rose and Kyle Honour, along with some new recruits, such as former Super Sedan racer Adam Bradford.

To minimise crowd congestion and facilitate social distancing, gates open at 1.00pm, with early racing from 4.30pm. The main program, which will also see Stockcars make their return, gets underway at 6.00pm. Tickets are limited and are available for purchase online. A limited number of tickets will be available for purchase at the gate if the full allocation of tickets has not sold out online. When purchasing at the gate, please be aware that COVID tracing requirements will result in longer processing times as the name, address and phone number of each ticket holder must be recorded. Those sitting in the grandstand or bleachers MUST leave a vacant seat between groups, while those seated on the grass hill MUST have a 1.5 metre distance between groups.